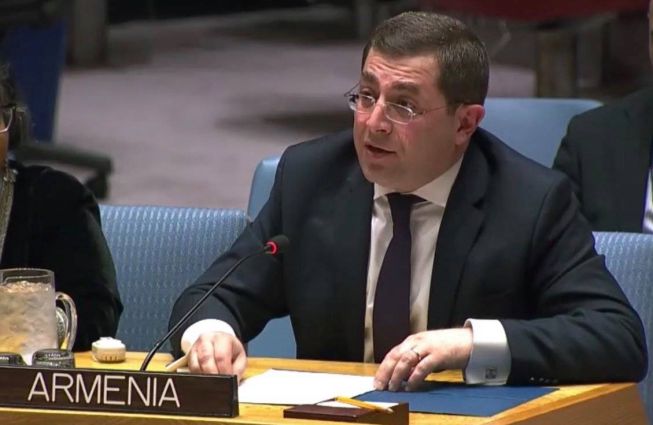 On February 13, United Nations Security Council held an open debate on the subject “Peacebuilding and sustaining peace: transitional justice in conflict and post‐conflict situations”․ Presided by Philippe Goffin, Minister for Foreign Affairs and Defence of Belgium, the meeting featured statements by UN High Commissioner for Human Rights Michelle Bachelet and representatives of over to 60 member states.

Addressing the Council, the Permanent Representative of Armenia Mher Margaryan highlighted the importance of comprehensive transitional justice processes in terms of ensuring accountability for past atrocities, as well as for the realization of the rights to truth, justice, reparation and guarantees of non-recurrence.

Ambassador Margaryan underscored that Armenian nation, which has been subject to genocide in the beginning of the 20th century, continues to face the attempts of denial and justification of the past crimes.

The Permanent Representative of Armenia stressed that genocidal acts against Christians, Yazidis and other communities committed by terrorist organizations in Syria and Iraq come to demonstrate that denial and impunity for the past crimes lead to their repetition. He emphasized that recognition and condemnation of the past atrocities is vital for preventing identity-based crimes, protecting human rights and achieving genuine reconciliation and sustainable peace.

Stating that, within the United Nations, over the years, Armenia has been consistently promoting resolutions related to the prevention of genocide, the Permanent Representative of Armenia emphasized that the denial of the Armenian Genocide and insulting the dignity of the victims obstruct the realization of the right to truth and the efforts to prevent future atrocities.