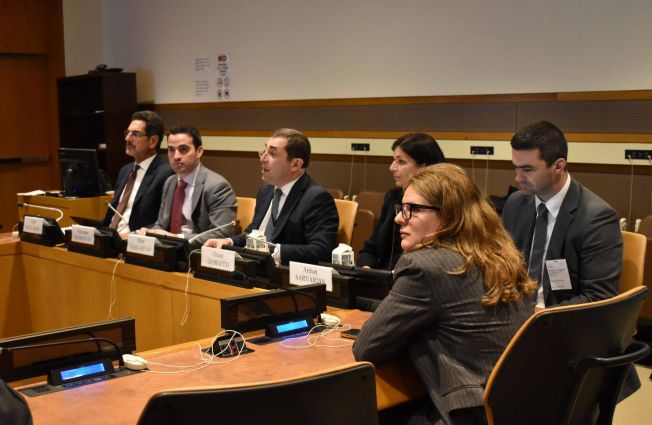 I am pleased to welcome you to the side event on the margins of the International Legal Week organized by the Permanent Mission of Armenia to the UN, in partnership with the International Law Association American Branch and the Armenian Bar Association. Today’s round table discussion will seek to address one aspect of international legal practice, which plays a critical role in defining the conduct of legal practitioners in the administration of justice, in particular, one that involves ethical considerations for advocates representing state clients. Discussions will also look into the role played by the practitioners themselves in developing, implementing and enforcing ethical standards, as well as the role of the international community in this regard.

It should be noted, perhaps, by way of brief introduction, that, historically, international efforts seem to have been focused primarily on setting ethical standards for the conduct of judges. These are most prominently grounded in the landmark Basic Principles on the Independence of the Judiciary (1985), as well as the Principles of Judicial Conduct (2003), which outline the values of independence, impartiality, integrity, propriety, equality, competence and diligence as necessary to ethical conduct of judges, and which, at the time of their adoption, represented a major step towards filling the gap in the international legal framework regarding judicial ethics.

Today’s event is an opportunity to not only take a closer look into the question of ethics as it relates to the work of lawyers and advocates, but also to initiate a conversation, which could lead to further efforts, on national, regional and international levels, to address this particular aspect of legal practice.

For Armenia’s part, domestically, we have been consistently working to codify progressive ethical norms and standards governing the conduct of lawyers, as manifested through relevant legislative framework, notably, the Law on Advocacy. The Code of Conduct adopted by Armenia’s Chamber of Advocates has been essential in prescribing ethical standards grounded in the norms and principles of the Code of Conduct for European Lawyers. In close collaboration with the Council of Europe, legal professionals in Armenia are offered comprehensive training courses on ethics and integrity, which are conducted for judges, prosecutors and lawyers. And we are keen to continue to exchange views and experiences and to foster further cooperation.

In debating the questions of ethics and integrity, especially, as they apply to administration of justice at the international level, one cannot disregard the role of the context, in which practitioners operate and continue to shape evolving ethical standards.

Often, these are extensively influenced by choices and decisions about clients and cases that lawyers can select in representing states before international courts and tribunals, whereby the nature of the client government itself could well define the advocate’s ethical record. This can be particularly true for lawyers representing states with flawed record in human rights, high level corruption and the lack of rule of law domestically. More often than not, such governments turn to international institutions to repurpose and reshape international norms and standards, and use tools of transnational litigation to preserve the ability to repress.

Our very own national experience involving a case against the state with the worst human rights and corruption record in Europe and indeed in the world,  is a case in point, which has already demonstrated particular advocate’s ethical volatility.

In the absence of effective protection mechanism against state interference, exacerbated by the rise in hate speech, misinformation and disinformation, it is important to examine more closely the ways, in which voluntary and binding ethical standards can impact the conduct of advocates before international courts and tribunals.

It has been suggested, that it is, indeed, possible to achieve the creation of an international judicial culture grounded in common values of ethics, responsibility and solidarity, and that one way to realizing this long-term objective would be  by means of creating a regulatory authority to ensure some form of internationally verified oversight. I am sure, our distinguished panelists will have a chance to elaborate on this in more detail in course of today’s conversation.

This brings me to the end of my welcoming remarks, and I now have the distinct pleasure to introduce today’s panel:

And I am very grateful to Mr. Grant Hanessian, independent arbitrator and neutral in New York, who will moderate our session.

I also want to thank all the attendants of today’s round table discussion, our UN colleagues, legal practitioners, representatives of civil society and academic institutions, and, of course, the staff of the Permanent Mission of Armenia to the United Nations for organizing this event.

Thank you and I wish you most fruitful deliberations.