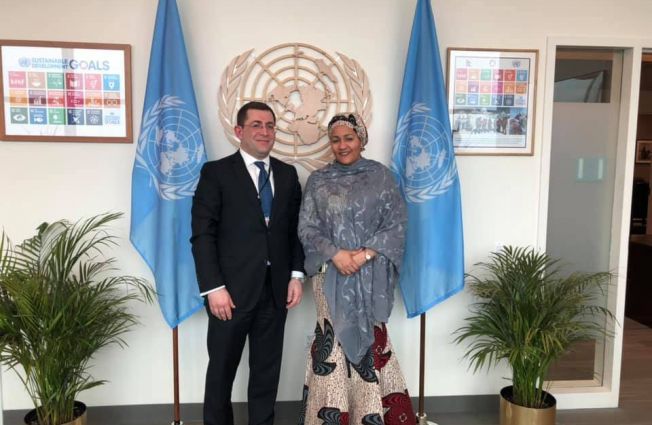 The Permanent Representative of Armenia briefed Amina Mohammed on the latest post-electoral processes in Armenia, highlighting the positive role of effective cooperation between the Government of Armenia, the UN agencies and the UN country team in the preparatory phase of the electoral process.

Deputy Secretary-General congratulated on the conclusion of the parliamentary elections in Armenia held in conformity with international standards, noting that the developments in Armenia provide an inspiring and reassuring example for the United Nations.

The interlocutors touched based on the ongoing reform process of the United Nations, UN-Armenia cooperation for sustainable development and innovation agenda, including in the context Armenia’s membership in the Economic and Social Council of the United Nations. The Permanent Representative of Armenia reaffirmed the commitment of the Government of Armenia to the process of nationalization and implementation of the sustainable development goals with a primary focus on strengthening rule of law, protection and promotion of human rights, ensuring equal economic and social opportunities for all, fighting corruption.

Ambassador Margaryan informed the Deputy Secretary-General on the recent developments with respect to the Nagorno-Karabakh conflict and Armenia’s views and priorities. The interlocutors highlighted the importance of maintaining an environment conducive to peace talks as well as the continued and unwavering support of the United Nations and the Secretary-General to the efforts of the OSCE Minsk Group co-chairs for the peaceful settlement of the conflict.