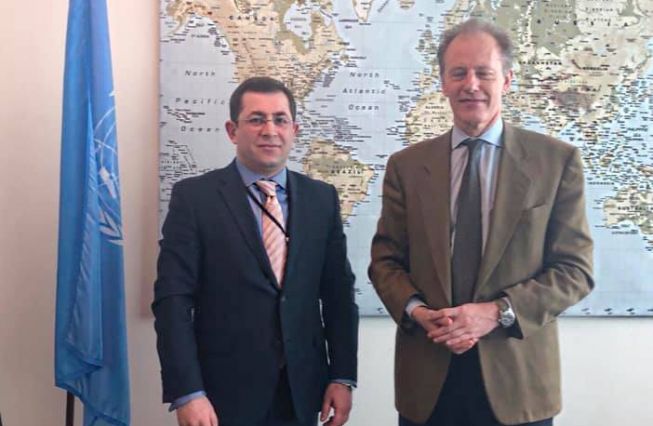 On 22 February, the Permanent Representative of Armenia to the United Nations Mher Margaryan met with Andrew Gilmour the UN Assistant Secretary-General for Human Rights.
The Permanent Representative of Armenia briefed the Assistant Secretary-General on the developments following the peaceful popular revolution in Armenia, referred to the parliamentary elections and the post-electoral processes, highlighting the unprecedented assessment of international observers and media. The Permanent Representative reaffirmed the commitment of the Government of Armenia to continuing on the path of reforms launched in the country, in particular, in the area of promotion and protection of human rights, upholding the rule of law, justice, as well as in fighting corruption and promoting equal opportunities in the economic and political life.
Assistant Secretary-General congratulated Armenia on the conclusion of the parliamentary elections held in conformity with international standards, noting that developments in Armenia provide an inspiring example for the United Nations.
The interlocutors discussed the established cooperation between Armenia and the UN for the promotion and protection of human rights, including in the area of prevention of genocides and crimes against humanity.
Assistant Secretary-General Gilmore commended the democratic transformations in Armenia expressing readiness for cooperation towards implementation of joint initiatives in the area of human rights