Statement by H.E. Mher Margaryan, Ambassador, Permanent Representative of the Republic of Armenia to the United Nations at the Plenary meeting on the Report of the Secretary General on the work of the Organization 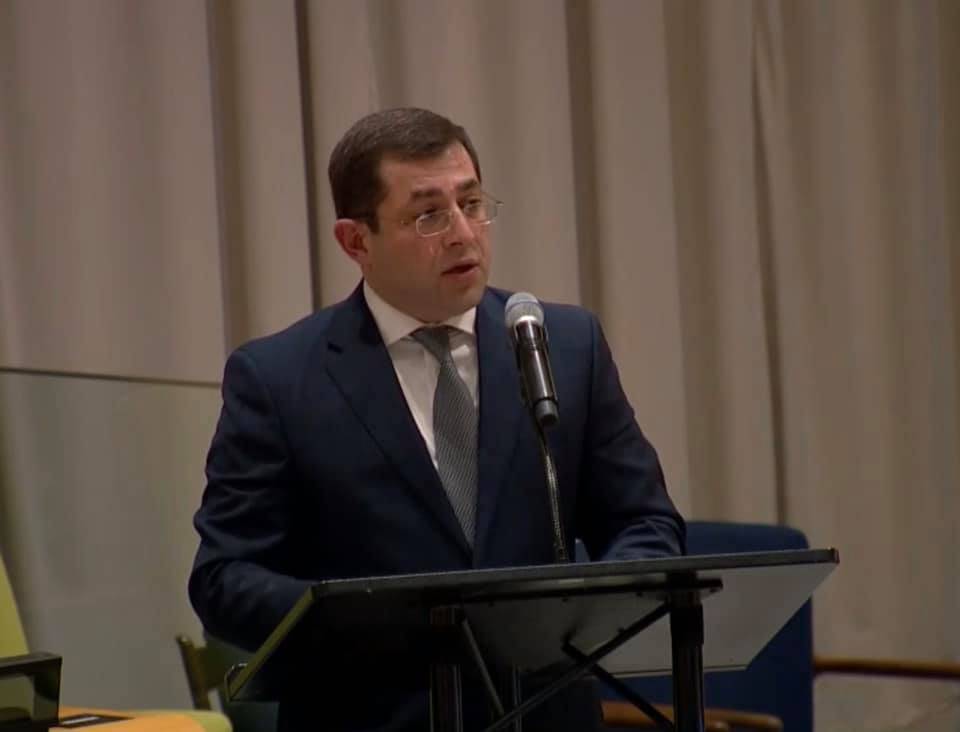 UNGA 74 /Agenda item: 110
Plenary meeting on the Report of the Secretary General on the work of the Organization

Statement by H.E. Mher Margaryan, Ambassador, Permanent Representative of the Republic of Armenia to the United Nations

I would like to thank the Secretary-General for presenting the Report on the work of the United Nations and outlining his priorities for the year 2020. We are grateful to the Secretary-General for efforts to advance the work of the Organization amidst a growing range of complex challenges in the world.
Armenia supports the vision of a stronger United Nations, which is fit for purpose and is able to adapt to the evolving realities, in order to better respond to the existing and emerging threats and to ensure sustainable and inclusive development for all. We support Secretary-General in accelerating the reform of the Organization aimed at increasing its transparency, accountability and better implementation of mandates, while avoiding redundancies and duplication of efforts.

We firmly believe that upholding and protecting human rights is an essential prerequisite for promoting peace, settling conflicts and crises and ensuring sustainable development.

We also want to underline the importance of strong collaboration with regional arrangements internationally mandated formats for sustaining peace and resolving conflicts. In this respect, we highly appreciate the Secretary General’s continued, committed and unequivocal support to the OSCE Minsk Group Co-Chairs for the peaceful resolution of the Nagorno-Karabakh conflict.

As a long-standing advocate for the prevention agenda, Armenia supports the Secretary-General’s approach on investing more into the prevention efforts. The endeavors in this area should aim at enhancing coordination of the work carried out across the UN system towards #prevention of genocide, war crimes and crimes against humanity and more effective integration of such activities in the work of the Organization. A timely detection and identification of the early warning signs of intolerance, xenophobia and hate crimes remains a crucial priority for identifying potential challenges and threats to peace and security and delivering adequate response.

Efficient and result-oriented cooperation between member states in achieving the Sustainable Development Goals is an important test for the power of multilateralism and requires concerted and coordinated efforts on the part of stakeholders. Armenia is committed to the implementation of the sustainable development goals and we continue to actively work with all our partners to this end. The ambitious reform agenda set forward by the Government of Armenia aims to promote smart development and innovation, having embraced the important priorities of building environmentally resilient economy and gender sensitive policies for economic and social empowerment of women and youth.

As demonstrated in the report of the Secretary-General, a renewed pushback against women’s rights and gender equality as well as violence against women and girls continue to remain pervasive challenge and require adequate response.

The landmark anniversaries of the key international documents for women’s rights and gender equality, such as the 25th anniversary of the Beijing Declaration and Platform for Action and the 20th anniversary of UN Security Council resolution 1325 on Women, Peace and Security, create an important momentum to amplify the collective efforts to fight discrimination and ensure gender equality.

The upcoming 64th session of the CSW is a landmark occasion to step up efforts to further advance gender responsive policies and inclusive participation of women in political and public life. As chair of the CSW I want to commend the Secretary-General’s championing of women’s rights and for advancing the role of women in the leadership positions across the Organisation.

The 2030 Agenda for Sustainable Development remains a key global framework for development cooperation. We are encouraged about the commitment of the UN development system toward strengthening coherence and coordination, in support of the implementation of the SDGs, and we welcome discussions to this end, including throughout the deliberative sessions of the Economic and Social Council.

Having assumed the Vice Presidency of the ECOSOC, Armenia looks forward to an open and active dialogue with the membership, in particular, by making best use of the interactive exchange platforms offered by the integration segment, ahead of the High-Level Political Forum for Sustainable Development this year.

The 75th anniversary of the Organization and the Decade for Action for the implementation of Sustainable Development Goals should provide impetus to further consolidate and accelerate efforts in support of the reform process, ensuring better performance of the United Nations and elevating its irreplaceable role as the bedrock of multilateralism.