Statement by H.E. Mr. Mher Margaryan Permanent Representative of Armenia on the occasion of the UN Security Council open video teleconference entitled “Towards the fifth anniversary of the youth and peace and security agenda” 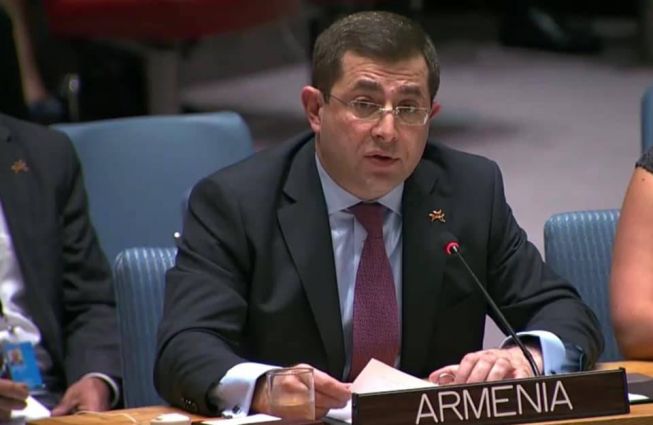 Five years ago, by adopting the UN Security Council Resolution 2250, the Security Council recognized the essential role of young women and men in preventing and resolving conflicts and in sustaining peace. The landmark anniversary is an important opportunity to reflect on the progress of the member states and to scale up the efforts of the international community in promoting meaningful participation of young people in advancing peace, justice, dialogue and reconciliation and bringing the youth perspective to better respond to the multiple challenges posed by COVID-19 pandemic.

The first ever report by the UN Secretary-General on youth and peace and security released in March this year depicts numerous challenges, which young people face, including violation of their human rights, exclusion, inequality, deficiencies of education, unemployment and the shrinking civil space. It highlights the importance of meaningful participation of youth in public and political life at all levels and the necessity of creation of enabling environment for young people, in which they are seen and respected as equal citizens with equal rights and equal voices. I commend the efforts of the UN Secretary-General’s envoy Ms. Jayathma Wickramanayake to advocate active youth engagement across all pillars of the Organization.

The government of Armenia is placing considerable priority on the promotion of inclusive participation of youth, in political and public life, most importantly, at the decision-making levels. The young people in Armenia represent a very vibrant and active part of our society. Young men and women played a key role in democratic transformation in Armenia throughout the peaceful Velvet Revolution in May 2018 by fully exercising their right to freedom of expression and peaceful assembly in non-violent manner. A remarkable progress has been achieved in terms of empowering young leaders as reflected in the current composition of the government, the parliament, as well as the regional authorities in Armenia.

Young people are important agents of change and social transformation. Attempts to restrict the fundamental freedoms of expression and movement of young people or to impede their dialogue and interaction, in particular, in conflict situations, result in deepening the dividing lines and can further lead to the most serious manifestations of intolerance, such as hate crimes and atrocities on ethnic and religious grounds. Young people are especially prone to radicalization, in particular in an environment of state-led policy of promotion of hatred. Employing divisive narratives and ethnic profiling at the educational institutions, glorification of hate crime perpetrators as models for young people, should be resolutely condemned by the international community. By contrast, education policies that aim to promote human rights, dialogue and inclusion represent an important tool for the prevention of radicalization of young people, fostering understanding of the cultural diversity and tolerance towards different religions and cultures.

We firmly believe that young people can play a key role at all stages of conflict resolution, particularly, in promoting dialogue and confidence-building across the dividing lines. The young generation of the Armenians in Artsakh (Nagorno-Karabakh), who have been raised free from outside oppression and foreign domination, are direct contributors to a conducive environment for realization of their fundamental human rights, and meaningful participation in the public and political life, including through exercise of the right to vote and to take part in government. The recently held free, competitive and democratic parliamentary and presidential elections are illustrative in this regard.

We acknowledge the important work of the civil society and youth organizations in empowering the young people to raise their voice for peace, non-violence and reconciliation. Inclusive and meaningful engagement of youth, in particular those residing in conflict areas, in peacebuilding initiatives, promotion of dialogue, confidence and trust, as well as building youth partnerships are key to sustainable peace.

Armenia is committed to advancing youth, peace and security agenda, harnessing the untapped potential of young people and amplifying their voices and aspirations in building a safer world.