Remarks by H.E. Mher Margaryan, Ambassador, Permanent Representative of Armenia to the United Nations, at the UN Digital Dialogue Commemorating the Sixth Anniversary of the Genocidal Campaign against the Yazidi Minority 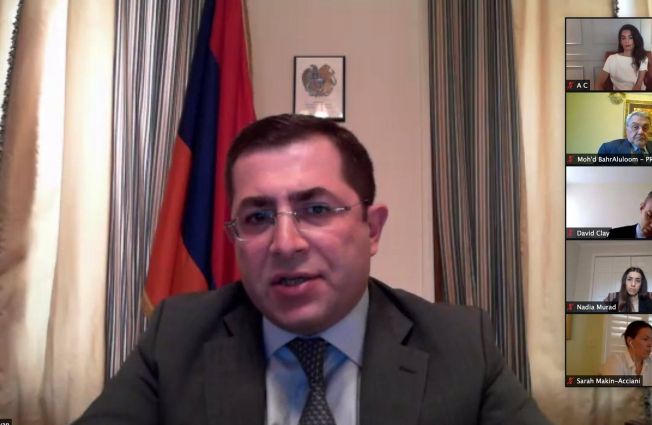 
I would like to thank Nadia’s Initiative campaign and the Permanent Mission of Germany and United Arab Emirates for organizing and co-hosting this important dialogue, and for the opportunity to reflect on the plight of the Yazidi people in the face of mass atrocities perpetrated in the name of religion. I applaud the courage and dedication of Nadia Murad and Amal Clooney and appreciate their relentless efforts in confronting atrocity crimes.
It is important to constantly raise awareness on the existential threats faced by the Yazidis, as well as Christians and other religious and ethnic groups in the Middle East as a consequence of inhumane ideology and atrocities perpetrated by the terrorist organizations, such as the ISIL, Al Nusra Front, Al Qaeda and others.
Armenia remains gravely disturbed by the instances whereby entire communities are deliberately targeted for the mere fact of belonging to a particular ethnic or religious group. In 2018, the National Assembly of Armenia adopted a Statement on the recognition and condemnation of the Genocide of Yazidis by the terrorist organizations, calling for investigation and accountability for the crimes committed and to ensure security and protection of the Yazidi people and take all necessary measures to prevent human rights violations.
Historically, our country has been a homeland for the Yazidi people, and, last year, the largest Yazidi temple in the world was opened in Armenia, which also symbolizes the centuries-old interfaith and intercultural harmony and coexistence between the Armenian and Yazidi peoples.
As a nation who has been subjected to genocide in the beginning of the 20th century, Armenia has been consistently campaigning to reinforce the implementation of the Convention on the Prevention and Punishment of the Crime of Genocide and to advance the prevention agenda.
In December this year, Armenia will be hosting the Fourth Global Forum against the Crime of Genocide with the specific focus on the plight of women, offering a gender perspective for prevention of genocide and crimes against humanity.
I want to reiterate the importance of building tolerance and inclusion for all ethnic, cultural and religious identities and working towards advancing the positive message of diversity and harmony of civilizations. At this difficult time of global crisis caused by the pandemic, irresponsible actions that serve to introduce new divisive lines between religious groups instead of providing cultural space for all, and attempts of instrumentalizing world heritage sites with the purpose of promoting political agendas represent a matter of serious concern.
In conclusion, I want to once again thank the organizers for this valuable initiative and to emphasize the need to take resolute actions by the international community to fight crimes on ethnic and religious grounds and highlight the importance of remembrance and commemoration as crucial elements to prevent future atrocities.
I thank you.
share:
MFA RA
official website
Dual citizenship
Electronic visa
Visa applications