Statement by Davit Grigorian, Second Secretary, Permanent Mission of Armenia to the UN, at the UNGA 75 / Second Committee General Debate 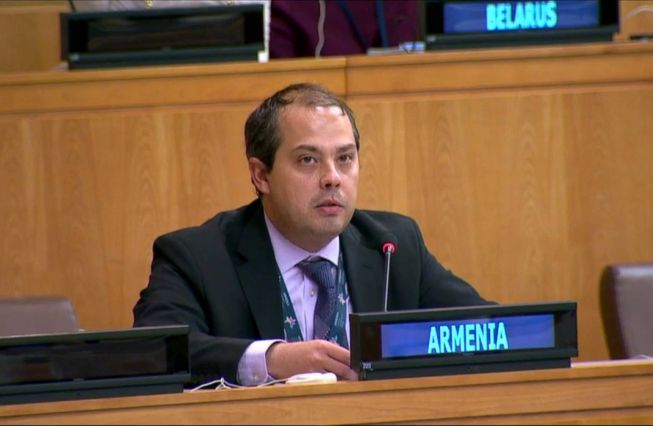 
Mr. Chair,
At the outset, I would like to congratulate you and the members of the Bureau on your election and to assure you of my delegation’s full cooperation and support throughout the session.
This year we meet as the world is facing unprecedented humanitarian and socio-economic crisis caused by pandemic, which continues to affect every nation’s health and livelihoods - with the most vulnerable suffering the most, as well as inflicts serious setback on the progress in achieving Sustainable Development Goals.
Deliberations in the Second Committee - one of the key multilateral platforms for development cooperation - should play an important role in shaping the ways to recover from the crisis and build back better. In this regard, the theme of the General debate this year “Building Back Better after COVID-19: ensuring a more equitable global economy, inclusive societies and sustainable recovery” could not be more timely and relevant.
In leading the effective post-COVID recovery and building back better, while ensuring that no one is left behind, the 2030 Agenda remains as relevant as ever. As we have also entered the Decade of Action, the urgency of meaningful progress towards achieving the SDGs cannot be overestimated. We note with satisfaction the significant progress in the United Nations Development System reform to be better prepared to assist the Governments to accelerate the implementation of SDGs.
Mr. Chair,
While many nations around the world have been struggling with the global socio-economic crisis caused by COVID-19, some states have decided to take advantage of the global vulnerabilities caused by the pandemic to materialize their long-standing threats of using force in clear violation of the Secretary-General’s appeal for global ceasefire.
On 27 September, the armed forces of Azerbaijan with support of external actors and foreign terrorist fighters, have launched a large-scale attack along the entire line of contact with Nagorno Karabakh. Dozens of civilians were killed and hundreds wounded in the course of ongoing Azerbaijani aggression. Civilian settlements and critical infrastructure were destroyed, thus causing serious environmental risks. All calls by the international community to cease hostilities and commit to peace are openly rejected by Azerbaijan, which continues to endanger human lives and the right to development of peoples in the region.
Mr. Chair,
While the pandemic had an impact in every corner of our world, countries in special situations, such as Landlocked Developing Countries, are most sensitive to global shocks, and are particularly prone to disproportionate setbacks and consequences of the fallout caused by the pandemic.
In this regard, we attach particular importance to the full implementation of the Vienna Programme of Action for Landlocked Developing Countries for the Decade 2014-2024. The adoption of the Roadmap for Accelerated Implementation of the VPOA on 25 September is an essential step in accelerating concerted efforts of the international community in assisting the LLDCs to mitigate the negative impacts of the pandemic through comprehensive and inclusive recovery efforts and supporting the LLDCs in getting back on track towards the implementation of the sustainable development goals.
Mr. Chair,
Follow-up and review of implementation of SDGs is of a critical importance. In this regard, Voluntary National Reviews are the key tools to assess progress and challenges, as well as seek solutions and support. Armenia presented its Second VNR on the implementation of the Sustainable Development Goals on 10 July this year. The report reflects on the success, achievements and drawbacks of the previous years, as well as introduces a long-term transformational vision. The Government of Armenia has been implementing ambitious reform agenda, which includes almost all the areas of public life, especially focusing on human rights protection, rule of law, combating corruption, improved public administration along with economic and social development.
The Government of Armenia has synchronized the SDGs with Armenia`s national priorities and reform agenda, by incorporating them into national strategies with an institutionalized and inclusive approach. The “Armenia Transformation Strategy 2050”, with its 16 mega goals lays out Armenia’s long-term socio-economic, educational and human development objectives for the next 30-year period. Investing in people and embracing the national talent as the driver of smart development defines the nature of Armenia’s reform agenda, with particular emphasis on fostering innovation and development of the ICT sector.
In conclusion, Mr. Chair, let me reaffirm Armenia’s full commitment to effective multilateral cooperation for development at the global, international and regional levels. We look forward to working with all our partners to identify measures to be taken to accelerate implementation of 2030 Agenda and SDGs in the Decade of Action.
I thank you.
share:
MFA RA
official website
Dual citizenship
Electronic visa
Visa applications