Statement by Mrs. Sofya Margaryan, Legal Adviser, Permanent Mission of Armenia to the UN, at the UNGA Sixth Committee/Agenda Item 81 “Crimes against humanity” 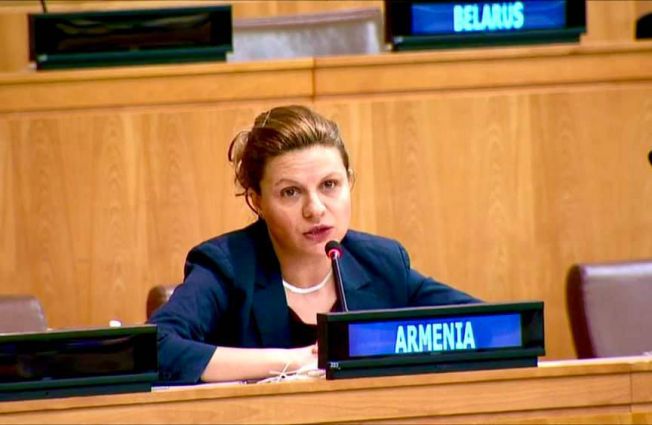 
Mr. Chair,
Armenia welcomes an open and inclusive process on the discussion of the draft articles on the prevention and punishment of crimes against humanity. Building further cooperation on this important subject will be a major step towards a world, where the rights of people, no matter where they are, must be properly protected. Armenia recognizes the importance of the jus cogens character of the prohibition of crimes against humanity, as reflected in the preamble of the text.
We note that a degree of consensus has been duly captured in the draft articles reflecting the shared objective of combating impunity for the perpetrators and delivering justice to the victims. It is important to build upon this consensus to develop the capacity of the international community to protect people, the owners of the Charter of the United Nations, from crimes against humanity.
Armenia reaffirms that Member States must make every effort to prevent and punish such crimes. In doing so, we are mindful of the historical context shaping the very term “crimes against humanity” used for the first time by the Allied Powers in their Joint Declaration in May 1915 to condemn the mass killing of Armenians in the Ottoman Empire, which represented the origin of the use of the term as the label for a category of international crime. In 1948, the United Nations War Crimes Commission invoked the massacres of the Armenian population in Turkey as an example of categories of “crimes against humanity” and a precedent to the Nuremberg Tribunals. The Report of the United Nations War Crimes Commission to the Economic and Social Council in 1948 elaborates that the Declaration of the Allied Powers of 1915 "dealt precisely with one of the types of acts, which the modern term "crimes against humanity" is intended to cover, namely, inhumane acts committed by a government against its own subjects", and that the mentioned Joint Declaration resonated in setting of the 1919 Commission of Responsibilities resulting in the elaboration of the formal list of crimes, almost all of which “constitute per se or involve in given circumstances violations of inherent human rights”.
The international community failed to prevent the Armenian Genocide, largely due to the lack of preventive mechanisms and the crisis of international order at the time. Hundred years on, however, the ability of the international community to properly identify and react to crimes against humanity is still being considerably challenged. It has been said too many times before that crimes unpunished lead to recurrence and repetition. More often than not, at the heart of the crimes against humanity is a history of continued violations of fundamental human rights. Against the backdrop of the multiple ongoing challenges, including those caused by the global pandemic, particular elements of societies, where such history persists and where policies of identity-based hatred and intolerance are led and cultivated at the highest political level, become especially prone to the risk of atrocity crimes, as some governments and politicians exploit and weaponize the pandemic to advance their domestic and foreign policy agenda.
The situation in our region is a case in point. Amidst the outbreak of an unprecedented global pandemic, Azerbaijan, with the support and encouragement of Turkey, has been conducting a large-scale military offensive, which has been going on for the past three weeks leading to the most intense and destructive escalation in the region since 1990s. Today, the lives of thousands of civilians and the ancient Armenian heritage of Nagorno-Karabakh have come under imminent existential threat, as indiscriminate attacks with extensive use of heavy artillery, drones and even prohibited weapons are being conducted in flagrant violation of the international law, including international humanitarian law. There are numerous confirmed reports and a mounting international condemnation about the fact that these criminal actions are being carried out with the direct involvement of thousands of foreign terrorist fighters and mercenaries recruited and transferred to the conflict zone by Turkey.
Azerbaijan, together with its enabling state, bear direct responsibility for the unprovoked, disproportionate violence and for the demonstrated intention to inflict immense suffering on the civilian population, among them women, children and people with disabilities. Armenia condemns such actions in the strongest terms and views them as an affront to the values, ideals and principles of the United Nations, including the collective commitment to prevent and punish crimes that “deeply shock the conscience of humanity”.
I thank you.
share:
MFA RA
official website
Dual citizenship
Electronic visa
Visa applications