Statement by Mrs. Sofya Margaryan, Legal Adviser, Permanent Mission of Armenia to the UN, at the UNGA Sixth Committee/Agenda Item 83 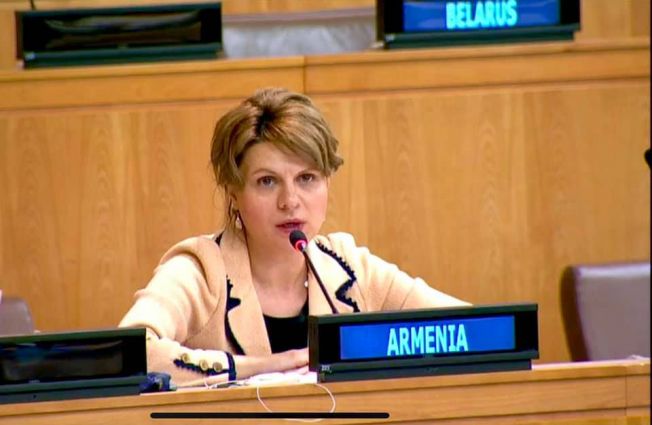 Mr. Chair,
We thank the Secretary-General for the report on the status of the Protocols Additional to the Geneva Conventions relating to the protection of victims of armed conflicts. Armenia has submitted a detailed input to this year’s report and would like to make the following remarks.
Armenia reaffirms the imperative of strengthening compliance with the international humanitarian law and encourages universalization of the Additional Protocols to the Geneva Conventions related to the protection of victims of armed conflicts. In recent years, Armenia has successfully integrated the international humanitarian law into the academic curricula, with a strong focus on human rights and education for prevention of genocide. Earlier this year, the UNESCO Chair on Genocide Education and Prevention became operational in Armenia to underpin efforts in fighting impunity for genocide, crimes against humanity, war crimes and violations of international humanitarian law.
We attach particular importance to protecting the rights of all women and girls in implementing obligations under international humanitarian law. The first National Action Plan adopted by the government of Armenia on the implementation of the UNSCR 1325 for a three- year period of 2019-2021 places a special focus on the rights of women in conflict-affected areas, those displaced or under the risk of displacement.
Mr. Chair,
The unprecedented crisis caused by the COVID-19 pandemic is reported to be the biggest humanitarian challenge humanity is facing since the Second World War. Evolving from a health emergency into a global crisis, with far reaching socio-economic and human rights implications, the pandemic presents an immediate challenge to the humanitarian systems. Among the hardest hit are the people trapped in conflict, and the lack of humanitarian access to the conflict areas, which further exacerbates their suffering, endangering the right to life and right to health of the affected population.
Armenia has unequivocally supported the appeal of the UN Secretary General António Guterres for an immediate global ceasefire in all corners of the world launched at the outbreak of the pandemic and joined the list of 170 signatories endorsing this important call. Armenia fully shares the Secretary- General’s view that uniting against the pandemic is not only a moral imperative, but also a matter of enlightened self-interest. After all, it is true that no one is safe until everyone is safe.
The ongoing hostilities conducted by Azerbaijan against Nagorno Karabakh, with the open and direct military involvement of Turkey and foreign terrorist fighters from the Middle East have led to the most intense and destructive escalation in the region since the 1990s, in grave violation of the international humanitarian law and ceasefire agreements.
In flagrant breach of the three consecutive agreements for a humanitarian ceasefire declared with the purpose of allowing for the exchange of POWs and the bodies of the dead with the facilitation of the ICRC, the armed forces of Azerbaijan continue to attack the civilian settlements in Nagorno-Karabakh, targeting essential infrastructure, including schools and hospitals, whose location is well known to the military. Azerbaijan’s egregious actions are aimed at denying people access to the most essential services, as well as erasing decades-long efforts for education, health and human security, revealing the criminal intention of making life in Nagorno-Karabakh impossible.
Two days ago, the UN High Commissioner for Human Rights alerted about the war crimes, including the acts of execution of two Armenian POWs by the Azerbaijani troops, in grave breach of the Geneva Conventions establishing the standards for humanitarian treatment during war time.
It is, indeed, incomprehensible that, as the pandemic continues to ravage the world, the leadership of Azerbaijan and their enablers have opted for war and destruction over peace and recovery. The leadership of Azerbaijan, who has been on record for taking pride in the high-accuracy capabilities of the modern high-tech, precision-guided weapons, is directly responsible for the violations of international humanitarian law throughout this criminal offensive, accompanied with deliberate attacks on civilian objects, journalists, medical workers, use of mercenaries, mutilations, public executions, inhuman treatment towards prisoners of war, use of prohibited weapons, breach of the ceasefire arrangements and other despicable indecencies amounting to war crimes. All such violations have been extensively documented and reported to the relevant international bodies and mechanisms.
I would like to stress that many of the rules contained in the Additional Protocols reflect the norms of customary international law and are therefore binding on all parties to armed conflict, of which no one is an exception.
Thank you.
share:
MFA RA
official website
Dual citizenship
Electronic visa
Visa applications