Statement by H.E. Mher Margaryan, Permanent Representative of Armenia, at the UNSC VTC, Arria Formula Meeting “Upholding the collective security system of the UN Charter: the use of force in international law, non-state actors and legitimate self-defence” 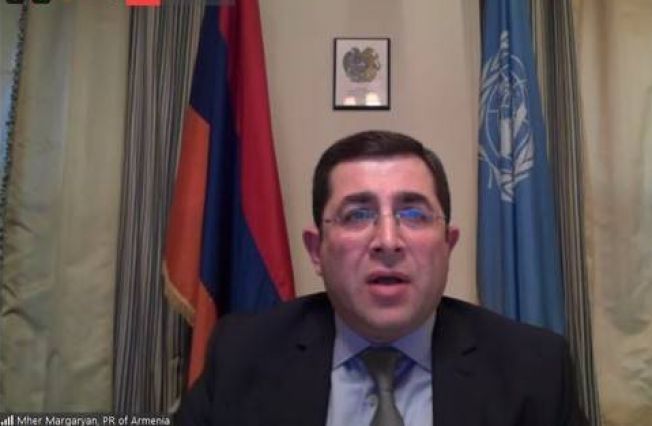 I would like to thank the Delegation of Mexico for organizing this Arria Formula meeting on upholding the collective security system of the UN Charter as well as Professor Modirzadeh of Harvard Law School Program on International Law and Armed Conflict for her very informative briefing. We appreciate Mexico’s efforts to promote dialogue on this important topic, also in the framework of the Special Committee on the Charter, through submission of the working paper on “Analysis of the application of Articles 2(4) and 51 of the Charter of the United Nations”.

In discussing the scope of the right to self-defence, an essential point of reference is the framework of the UN Charter, as Article 2 (4) clearly stipulates inadmissibility of threat or use of force in any manner inconsistent with the purposes of the United Nations. The issue of invocation of Article 51 needs to be addressed in the context of obligations arising from the peremptory norms of general international law, such as the right to self-determination, prohibition of genocide and crimes against humanity.

In a world, where conflicts and disputes, in their various forms, regrettably continue to persist, prohibition of the use of force and a strict adherence to peaceful settlement of disputes are indispensable to the maintenance of international peace and security. Nothing in the UN Charter or the general international law can justify instances of instrumentalization of the concept and practice of self-defence as a cover-up for military action in an effort to resolve an international dispute by use of force.

In this regard, to put the issue into context, I want to bring to your attention  the premeditated armed aggression of Azerbaijan against the people of Nagorno-Karabakh (Artsakh) unleashed in September 2020 which comes as a dangerous precedent of violating the pre-eminent obligation to strictly adhere to the principles of non-use of force or threat of force and the pacific settlement of disputes by opting, instead, for instigation of violence, conflict,  atrocity crimes and involving terrorist fighters.

A country, that over the years has been consistently rejecting the peace process and the proposals for the settlement of the conflict put forward by the mediators, has launched the biggest military escalation in times of the COVID-19 pandemic, with direct and unrestricted military support of another country - Turkey and involvement of thousands of foreign terrorist fighters and mercenaries from the Middle East. Given the nature and the scope of Azerbaijan’s violent conduct, resulting in the loss of thousands of lives and widespread destruction in the midst of a global health crisis, it is clear that such actions have been aimed not at defence but at an intentional infliction of maximum casualties on the Armenian side.

Such actions, have, in fact, demonstrated that not only this country was not acting in self-defence, but also that it had no intention of complying with the purposes and principles of the Charter of the United Nations. This was further evidenced by its failure to adhere in good faith to the trilateral statement on the establishment of ceasefire in the area of the Nagorno-Karabakh conflict, which stipulates, among other provisions, for the release of all prisoners of war and other detained persons. To this date, this key provision remains unimplemented by Azerbaijan, despite the calls of the international community, including the UN human rights experts, who have appealed for the prompt release of all prisoners of war and other captives from the Nagorno-Karabakh conflict.

On a final note, I want to emphasize the importance of the efficient utilization of the prevention toolbox of the United Nations and regional organizations for timely identifying of and adequately responding to the warning signs of gross violations of humanitarian law and human rights law, which if not addressed properly can lead to serious threats to the international peace and security.