Statement by H.E. Mher Margaryan, Permanent Representative of Armenia to the UN, at the UNGA plenary meeting on the Responsibility to Protect and the prevention of genocide, war crimes, ethnic cleansing and crimes against humanity 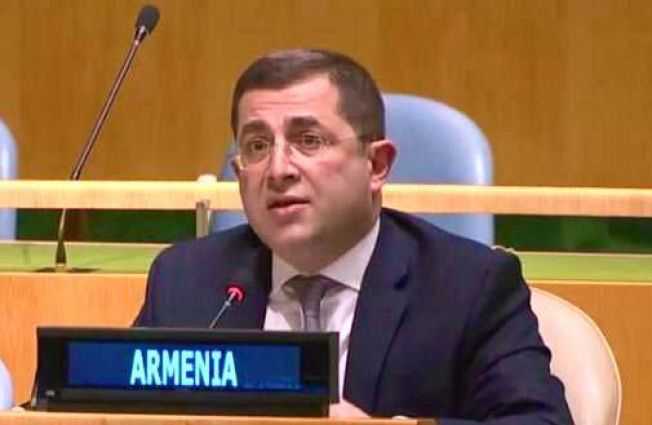 I would like to express profound appreciation to the Secretary-General for his report, which provides an important reflection on the root causes of the persistent challenges for advancing atrocity prevention.  Once again, we are reminded in the report that flawed capacities to protect human rights for all create particular risks for identity-based violations of human rights, the ultimate manifestation of which are genocide, war crimes and crimes against humanity. We are equally reminded that prevention is an ongoing process that requires sustained efforts towards promoting respect for the rule of law and human rights without discrimination.

Addressing and countering hate speech remain crucial priorities in delivering on the genocide prevention agenda. Incitement to hatred and hate crimes, denial, justification or glorification of past crimes, along with instances of racial and ethnic profiling constitute the detectable early warning signs, which, if unaddressed, can lead to further violence and atrocities. Armenia has welcomed the UN Strategy and Plan of Action on Hate Speech, which, as the Secretary-General has succinctly put it in his foreword, represents “a menace to democratic values, social stability and peace”.

Today, there is a growing, urgent need to step up collective efforts to fight racism, discrimination and xenophobia, which so often represent the root causes of atrocity crimes. Armenia has consistently raised its voice against the immense sufferings and mass atrocities perpetrated against ethnic and religious minorities. The continuous, systematic human rights violations, crimes on ethnic and religious grounds in the context of situations of humanitarian crisis require stronger engagement of the international community, including the human rights and preventive machinery of the UN system.

Fostering international cooperation for prevention of mass atrocities and the further development of national and international early warning mechanisms are important priorities of Armenia’s engagement within the United Nations.

Armenia, whose people have undergone through the horrors of Genocide in the early 20th century, will continue to support strong focus on the early action to prevent situations, which can result in crises and atrocity crimes.

As the main sponsor of the UN General Assembly resolution instituting the International Day of the 9th December as the Day of Commemoration and Dignity of the Victims of the Crime of Genocide and of the Prevention of this Crime, Armenia is fully committed to strengthening this important platform, most notably, through thematic events aimed at fostering cooperation for prevention of atrocity crimes and the further development of national and international early warning mechanisms.

The first intersessional meeting of the Human Rights Council on genocide prevention, held in February this year, is yet another reflection of our strong commitment to the mutually reinforcing agendas of human rights and genocide prevention which builds on our extensive national record in this field.

The Secretary-General’s report makes a salient observation that the national prevention efforts require addressing the legacy of the past, in particular, in countries and regions that have experienced atrocity crimes before. More often than not, at the heart of the crimes against humanity is a history of continued violations of fundamental human rights and identity-based violence, when policies of identity-based hatred and intolerance are led and cultivated at the highest political level.

In our part of the world, the brutal, large-scale violence unleashed amidst the global pandemic in an attempt to resolve the Nagorno-Karabakh conflict by force led to the most intense and destructive escalation in the region since 1990s, putting the lives of thousands of civilians and the ancient Armenian Christian heritage under existential threat.

Time and again, Armenia alerted the international community about the dangerously mounting level of hate speech and racist rhetoric dominating the political discourse in Azerbaijan, which constitutes all elements of incitement to violence against ethnic Armenians and represents a significant indicator of risk of atrocity crimes.

Azerbaijan’s continued failure to release the numerous prisoners of war and civilian hostages who are still being held in captivity, contrary to the international humanitarian law, the ongoing provocations by way of incursions into the territory of Armenia, as well as the wide-spread state-led campaign of dehumanization of Armenians, such as, for example, the recently opened “military trophy park”, which has already been named as “national hatred theme park” by the international media, come to manifest that the genocidal ideology does not merely belong to history.  This is a source of grave concern that needs to be properly identified and acknowledged to prevent further atrocities.

Armenia rejects all allegations and fabricated accusations voiced earlier by the representative of Azerbaijan, which was nothing short of a futile attempt to conceal the massive atrocities conducted by Azerbaijan in course of aggression unleashed on 27 September 2020.

Armenia condemns such actions in the strongest terms and views them as an affront to the values, ideals and principles of the United Nations, including the collective commitment to prevent and punish crimes that “deeply shock the conscience of humanity”.

Armenia remains strongly committed to advancing prevention agenda and shares the view that accountability for atrocity crimes prevention can be strengthened by open reflection and inclusive dialogue, with civil society, free media and academia playing a key role in this regard.

As ever, we recognize the central role of the Office on Genocide Prevention and the Responsibility to Protect and expect it to deliver adequate response, at all times, and to act in situations where atrocity risks exist, in any part of the world.