Statement by Davit Knyazyan, Deputy Permanent Representative of Armenia to the United Nations, at the UNGA 76 / First Committee 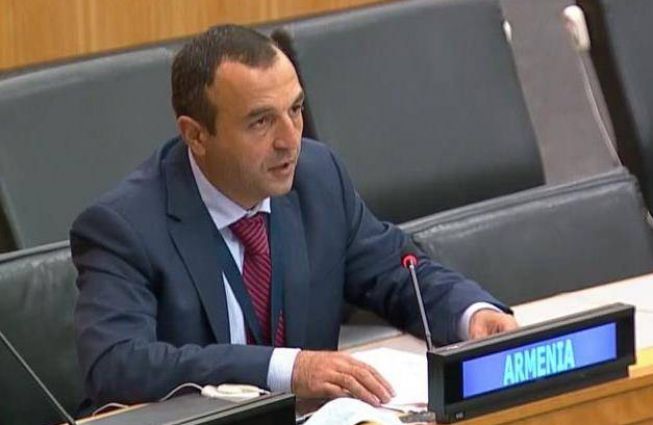 At the outset I would like to congratulate you and the members of the Bureau on assuming the leadership of the First Committee and to assure you of Armenia’s full support to your endeavours.

Armenia reiterates its unwavering commitment to the full and universal implementation of the international obligations in the areas of non-proliferation, disarmament, conventional arms control, and confidence and security building measures. We closely cooperate with partner countries in the framework of the United Nations and other international and regional organizations in supporting compliance with the relevant treaties and regimes.

The full, complete, and effective implementation of the Treaty on Non-Proliferation of Nuclear Weapons (NPT) remains the foundation for pursuing international efforts to prevent nuclear non-proliferation, support the goals of nuclear disarmament and advance cooperation in the field of peaceful use of nuclear energy. We hope that the upcoming Tenth NPT Review Conference will provide a new impetus for global action aimed at strengthening the nuclear security architecture and comprehensive implementation of the Treaty. Armenia supports the International Atomic Energy Agency in verifying implementation of the obligations on non-proliferation and addressing the cases of non-compliance.

Armenia underscores the importance of Conventional Arms Control and Confidence- and Security-Building Measures for ensuring military stability, transparency, predictability and risk reduction. In this regard, an effective, functioning, and comprehensive Conventional Arms Control regime is one of the cornerstones of the regional security architecture. Armenia reiterates its principled position on the imperative of implementation of all legally binding obligations under the Treaty on Conventional Armed Forces in Europe.

Likewise, Armenia has always placed high priority to the Vienna Document of 2011 on Confidence and Security Building Measures and other regional CSBMs in reducing tensions and consolidating the existing security arrangements. Armenia’s Chairmanship of the OSCE Forum for Security Co-operation in April-July this year under the motto “Rebuilding trust and confidence through implementation of Politico-Military Commitments” had focused on the implementation and protection of the OSCE commitments with the aim of preventing further erosion of the concept of comprehensive and inclusive European Security.

Armenia has consistently stressed that justification of non-compliance with conflicts goes contrary to the provisions of the CFE Treaty and Vienna Document of 2011. We have voiced our serious concerns in regard to the destabilizing and uncontrolled accumulation of heavy weaponry, exceeding of the CFE Treaty ceilings, failure to notify large-scale military exercises, conditionality in receiving inspections and exclusion of a large portion of armed forces from verification regime. Absence of adequate reaction of the international community to the breaches of the core provisions of the CFE Treaty and Vienna Document by Azerbaijan created a fertile ground for the latter to conduct preparations for a large-scale military offensive.

The aggression unleashed by Azerbaijan against Nagorno-Karabakh on 27 September 2021 with involvement of foreign terrorist fighters and mercenaries came to confirm the validity of concerns of Armenia. From the first day of hostilities Azerbaijan widely used all types of heavy weaponry, including multiple launch rocket systems, artillery, missiles, various types of UAVs and military aircraft and prohibited weapons, such as cluster munitions and incendiary weapons to conduct targeted attacks on the civilian population and infrastructure, including schools and hospitals in gross violation of the international humanitarian law.

In the aftermath of its aggression Azerbaijan resorted to expansion of the geography of tensions resorting to military provocations against Armenia. The armed encroachment against the territorial integrity of Armenia since May 2021 in the directions of Syunik and Gegharkunik regions, accompanied by reckless claims from the highest leadership of Azerbaijan towards sovereign territory of Armenia can further increase the tensions and destabilize the situation in the region, creating a serious threat for regional and international peace and security.

We are convinced that the international community should be resolute in the face of systemic and flagrant violations of legally binding international obligations and commitments, destabilizing military buildup and use of prohibited weaponry to commit gross human rights violations and atrocity crimes. Military posturing, warmongering and use of force as means of conflict resolution and imposing unilateral solutions should be resolutely and unequivocally condemned.

In conclusion, I would like to reiterate Armenia’s commitment to contribute to strengthening of international peace and security and advance cooperation in the field of disarmament, arms control and confidence building at global and regional levels.