Statement by H.E. Mher Margaryan, Permanent Representative of Armenia to the UN, Chair of the UNGA Fifth Committee at the Ad Hoc Working Group on the Revitalization of the Work of the General Assembly 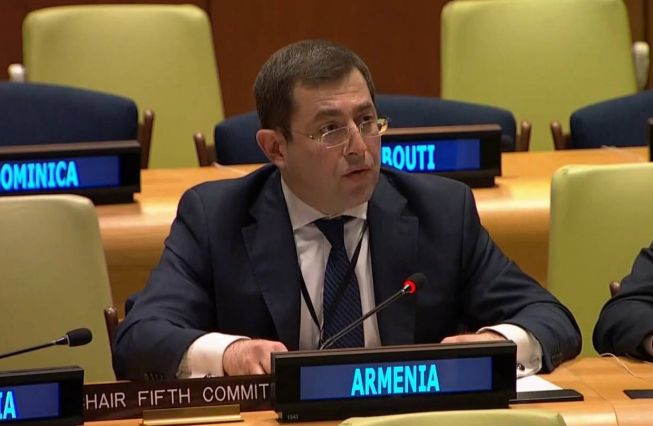 At the outset let me express my appreciation to the distinguished co-chairs of the Ad-Hoc Working Group on the Revitalization of the work of the General Assembly, Permanent Representative of Australia, Ambassador Mitch Fifield and the Permanent Representative of El-Salvador, Ambassador Egriselda López for their efforts in steering the deliberations of this very important forum. I would also like to welcome and thank my fellow colleagues, chairs of the Main Committees and the Secretariat officials for their presence and cooperation throughout the main, as well as ongoing resumed parts the session.

It is my pleasure and honor to brief the Ad-Hoc Working Group on the working methods and lessons learned in course of the activities of the Fifth Committee during the 76th session of the GA. Throughout this session, the Committee already had three occasions of deliberations on organizational matters of our work. The issue of improving the working methods has also been discussed during my interactions with the colleagues from various delegations, previous chairs, UN secretariat officials, as well as with the leadership of different entities involved in the budgetary and administrative matters.

The 76th session of the Fifth Committee is the last session of the three-year period of annual budget before the review that will take place during the Committee’s next session. The main and the first resumed sessions took place under the limitations in place due to the Covid-19. These limitations had a considerable impact on our work in light of restricted personal contacts, as well as lack of interpretation services during the informal consultations.

Having in mind that the Committee started its session under such constraints the Bureau adopted several measures in order to ensure business continuity based on the practice of the last two sessions. It was decided to conduct official meetings in person for a general debate on the organizational matters, for the introduction of several items and for taking action. The introduction of the rest of the items together with national statements and interventions of the Secretariat and ACABQ was carried out through electronic publication on the Fifth Committee’s website. The informal consultations were held virtually, but the Bureau made efforts to create conditions for physical meetings during the final phase of the negotiations. These measures helped to ensure smooth operation under challenging circumstances, eventually adopting the resolutions on the regular budget, program planning, scales and other important decisions in good time. The Committee managed to find the right sequence in handling the above-mentioned complex items and to conclude the negotiations as early as possible in order to provide the Secretariat with sufficient time to prepare the necessary documentation for action.

Under such circumstances, responsiveness and collegiality of the Bureau are of double importance, and I want to take this opportunity to express my deep appreciation to my Bureau colleagues for their committed engagement.

During its main session, the Committee considered 197 documents, requested a total of 1,764 questions to be answered in writing, recommended 16 draft resolutions and 1 draft report that were subsequently adopted by the General Assembly, as well as 15 draft decisions. During the First resumed session in March, 72 reports were considered, 239 questions were requested to be answered in writing, 4 draft resolutions and 1 draft decision were recommended and subsequently adopted by the General Assembly.

It is encouraging that, for the ongoing second resumed session, we are mostly getting back to normal working methods with full in-person engagements. However, I believe that during last years we have also accumulated very important knowledge that can be put to use with a view to making our work more flexible. Using the virtual or hybrid formats, in some cases, for informal-informal consultations, extensive use of online platforms and reducing the number of printed documentation are some of the lessons learned in this regard.

The collaboration between the main committees of the General Assembly is of great importance. The adoption of the GA resolutions with PBIs in good time allows the Fifth Committee to properly consider the items in question. During the main session, we also observed the joint work of the Main Committees in discussing the way forward with the programmes that had not been adopted by the Committee on Programme and Coordination during its 61st session. These coordinated efforts helped us to start substantive negotiations on the agenda of Programme Planning in the Fifth Committee. I would like also to commend the leadership of the President of the 76th session of the General Assembly and his valuable support to the efforts of the main committees in this regard.

Let me now turn to some generic issues that have been a matter for concern within the committee throughout the past few years.

As we all recognize, the work of the Fifth Committee has critical importance for the effective functioning of our organization. Decisions taken in this Committee provide the United Nations with the administrative and budgetary power to deliver on the ground, and therefore, it is of vital importance to preserve the consensus based decision-making practice. Unfortunately, there have been some deviations from this pattern in recent years. Lack of consensus did not allow to come to the adoption of resolutions throughout the past years on some very important agenda items, such as Human Resources Management, Supply chain and others. Ensuring inclusive nature of the negotiations, a more efficient use of time allocated for our work, as well as collegiality and team spirit can create necessary framework for building consensus.

Another specific aspect of our work is that almost under each agenda item the Committee takes up two or more reports. Timely provision of these reports in all UN official languages, as well as of the supplementary information from the secretariat is highly important for our work and for that purpose coordinated efforts with the Secretariat, ACABQ and other entities are required. We also need to think towards streamlining the written Q&A procedures and use the time allocated for our work more efficiently within the normal working hours.

Due to the introduction of new items and deferral of those, on which consensus has not been possible to reach, the agenda of the Committee becomes more loaded, which sometimes, due to the limited time allocated for our sessions and specificities of the negotiations in the Committee, does not allow us to have sufficient time for proper consideration of all issues contained in the program of work. Hence, in order to ensure that adequate time is given to each item, the biennalization of some items, without direct and immediate budgetary and administrative implications, could be a solution and reduce the overload in the Program of Work of the 5C sessions.

In conclusion, let me reiterate that during the current Second part of the resumed 76th session we will continue our efforts to identify best practices and lessons learned and I look forward to innovative and practical ideas from the delegations in this regard. I hope that these discussions will eventually enhance our ability to react to the changing circumstances and help us deliver more resilient and efficient working methods.