Statement by Mr. Davit Knyazyan, Deputy Permanent Representative of Armenia to the United Nations, at the GA Plenary under agenda item 31 - Report of the Security Council 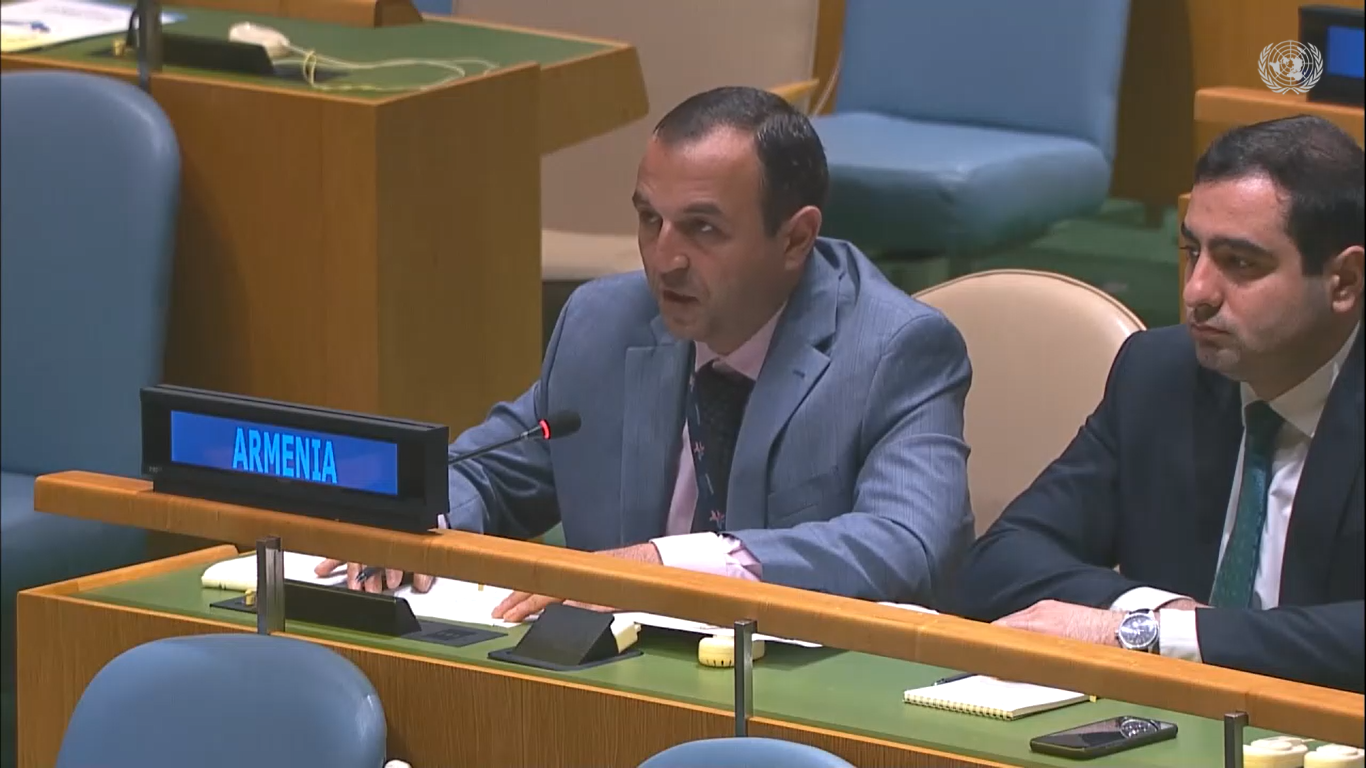 I take the floor in exercise of the right of reply to the Delegation of Azerbaijan.

We reject the attempts of Azerbaijan to hijack the agenda of the meeting by propagating its distorted conflict narratives and usual falsifications in regard to the underlying causes, essence and principles of resolution of the Nagorno-Karabakh conflict, to conceal its responsibility for the barbarism, aggression and numerous atrocity crimes against the people of Nagorno-Karabakh.

Equally deceptive are the arguments of the Azerbaijani side in regard to the legal aspects of the conflict. The proclamation of the Nagorno-Karabakh Republic took place in the context of disintegration of the Soviet Union and was strictly in line with the norms of the international law and the legislation of the USSR.

The attempts of the Delegate of Azerbaijan to mispresent Nagorno-Karabakh as “fake entity” by referring to internal decrees of its leadership are null and avoid. “Nagorno-Karabakh” is an internationally agreed term reflected in numerous international documents of the United Nations, the OSCE and official documents of the OSCE Minsk Group Cochairmanship, including those endorsed by Azerbaijan itself.

The desperate attempts to misrepresent the Nagorno-Karabakh conflict as an inter-state conflict through selective invocation or distorting of certain provisions of the 1993 UN Security Council resolutions do not withstand any scrutiny. The reality is that for many years, Azerbaijan has been ignoring the requests of the UN Security Council to refrain from the use of force, to restore economic, transport and energy links in the region, to ensure unimpeded access for international humanitarian relief efforts and to commit to a political settlement within the framework of the OSCE Minsk process.

Contrary to the demands of the international community, Azerbaijan continuously failed to honour its obligations under the ceasefire agreements of 1994 and 1995, repeatedly rejected proposals for diplomatic settlement, including the multiple proposals of the Co-Chairs of the OSCE Minsk Group Co-Chairs. Instead of committing, in good faith, to the peace process, the authorities of Azerbaijan for decades resorted to an uncontrolled and unabated military build-up in violation of their international obligations, warmongering, military provocations, while using the negotiation process as a smokescreen.

Last year Armenia brought to the attention of the Security Council number of communications regarding the situation in the Nagorno-Karabakh conflict zone. Notably, the Permanent Representative of Armenia in his letters reflected on the consequences of the pre-planned large-scale military aggression by Azerbaijan with involvement of foreign terrorist fighters against the people of Nagorno-Karabakh in the fall of 2020 contrary to the UN Secretary-General’s appeal for an immediate global ceasefire and in violation of the obligations under international law prohibiting the use of force to resolve disputes. Launched amidst the unprecedented global healthcare crisis, the aggression led to loss of thousands of lives, massive destruction, displacement, war crimes and atrocities, in gross violation of the international humanitarian law and human rights law.

In the aftermath of its aggression Azerbaijan continues to engage in persistent aggressive actions accompanied with violent rhetoric of open military threats, distorted interpretations of history, incessant territorial claims and. The armed forces of Azerbaijan systematically resorted to various forms of violent acts and provocations that seek to disrupt the normalcy of life in the border areas and deprive the civilian populations of their livelihoods. In the letters addressed to the President of the Security Council the Permanent Representative of Armenia presented the aggressive actions of Azerbaijan against the territorial integrity of Armenia since May 2021 in the directions of Syunik and Gegarkunik regions of Armenia, in flagrant violation of the purposes and principles of the Charter of the United Nations and international law, and their negative implications on the regional and international peace and security. The armed provocations were taking place against the backdrop of extensive use of hate speech and promotion of racist ideology, which continued to dominate the public discourse in Azerbaijan through various forms of dehumanization of the Armenians, open threats to use force, justifications of the continued military provocations and incitement of territorial claims against the Republic of Armenia.

Azerbaijan continues to ignore the calls of the international community on the immediate return of prisoners of war and other detainees, while denying the captivity of dozens of Armenian servicemen and civilian hostages and introducing bogus charges in an effort to instrumentalize the issue of detained persons, in violation of the Geneva Conventions and to the detriment of the full and effective implementation of the provisions of the Trilateral Statement of 9 November 2020 on the establishment of complete ceasefire and termination of all hostilities in the area of the Nagorno-Karabakh conflict. In this regard the Delegation of Armenia brought to the attention of the Security Council reports of the Human Rights Ombudsman of Nagorno-Karabakh, documenting illegal prosecutions and trials of the Armenian prisoners of war and civilian hostages, as well as killings and extrajudicial executions of the civilian population by the Azerbaijani armed forces.

In the similar vein, Azerbaijan obstructs and denies the humanitarian access of the international community to Nagorno-Karabakh to conduct comprehensive assessment of the humanitarian needs of the affected population. The Delegation of Armenia also brought to the attention of the Council the report containing the documented evidence of the deliberate destruction, desecration and misappropriation of the Armenian cultural and religious heritage, including churches, shrines and cultural monuments by Azerbaijan. Azerbaijan’s refusal to provide access to the independent fact-finding mission of UNESCO to conduct an inventory of the vast cultural and religious heritage of the region clearly indicates the imminent threat of destruction of any evidence of Armenia’s civilizational presence in Nagorno-Karabakh.

On a final note, we would like to stress the imperative of acting consistently, in support of a comprehensive, just and lasting settlement of the Nagorno-Karabakh conflict under the auspices of the OSCE Minsk Group Co-Chairs, which can pave the way for sustainable peace in the region.