Statement by H.E. Mr. Mher Margaryan, Permanent Representative of Armenia to the United Nations, at the High Level Forum on the Culture of Peace 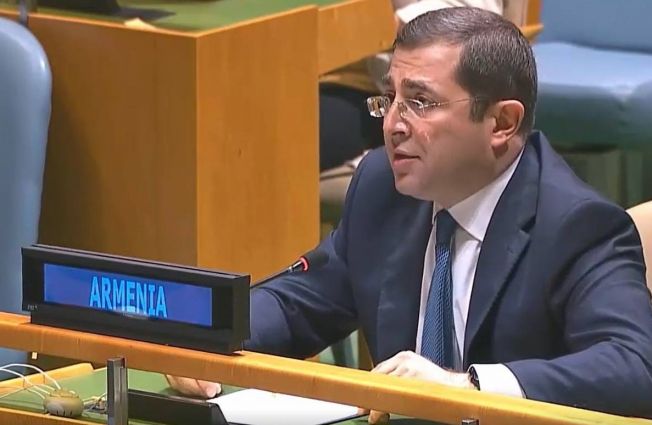 I thank the PGA, H.E. Mr. Abdullah Shahid for convening today’s forum and for the opportunity to offer reflection on the challenges for constructing culture of peace and the importance of justice, equality and inclusion.

One salient point that has been made today is that, despite continuous efforts of the international community to address the problems of intolerance, exclusion and discrimination,  their various forms and manifestations continue to persist. This is particularly relevant for societies, where intolerance, racism and discrimination stems from the policies of identity-based hatred led and cultivated by the state authorities.

Time and again, Armenia has alerted about the dangerously mounting level of racism and hateful rhetoric dominating the political discourse in Azerbaijan where state-led anti-Armenian policies - extensively reported and documented by international institutions - seek to dehumanize one particular nation.

Only last week, the UN Committee on the Elimination of Racial Discrimination issued its latest report on Azerbaijan, which finds, among other things, that there is incitement to racial hatred against persons of Armenian origin, including by public figures and governmental officials, and that school textbooks in Azerbaijan promote prejudice and incitement to racial hatred, particularly against ethnic Armenians.

Such findings are consistent with Azerbaijan’s systemic policy of ethnic cleansing and genocidal disdain against the Armenian people, most recently proven by its launching of war in an attempt to resolve the Nagorno-Karabakh conflict by force, in flagrant violation of the trilateral ceasefire agreements of 1994 and 1995.  The very fact that a large-scale military aggression was unleashed amidst an unprecedented pandemic is a crime of global proportion in itself and should be evaluated and addressed as such.

Despite Azerbaijan's efforts to offer justifications for its military aggression in September-November 2020, it was in reality the product of an intentional decision to walk away from negotiations and to begin a war, exposing the lives of thousands of people to imminent existential danger.

Emboldened by the results of the use of force, Azerbaijani leadership resorts to systematic violence and military provocations in blatant disregard to the norms of the international law. Equally disturbing are the attempts to instrumentalize the issue of POWs and civilian captives, whose return Azerbaijan continues to deny, in violation of the Geneva Conventions, and in defiance of the Provisional Measures issued by the International Court of Justice as a matter of urgency on 7 December 2021.

Obstruction of safe and unhindered humanitarian access of the UN agencies, including UNESCO to Nagorno-Karabakh undermines efforts for comprehensive assessment and response to the humanitarian needs of the civilian population, while threatening the existence of millennia-old Armenian heritage of Artsakh.

Arbitrary interpretations and distortions of the negotiation process by Azerbaijan and disrespect towards its legally binding obligations demonstrate lack of good faith and the intent to forcefully impose unilateral solutions on Armenia and Nagorno-Karabakh.

In this regard, I am compelled to note that neither the condescending tone, nor the self-righteous posture of the Azerbaijani officials or their representatives here at the United Nations are suggestive of anything other than arrogance and boastfulness which only demonstrates that for some, culture of threat, incitement and aggression continues to prevail over culture of peace.

Ensuring security, fundamental human rights and dignified life of the people of Nagorno-Karabakh in their ancestral homeland is key for achieving comprehensive, just and lasting settlement of the conflict and sustaining peace in the region.

Armenia will continue to work towards justice, equality, and inclusion in line with our unwavering commitment to the purposes and principles of the UN Charter and to the values and goals of the Declaration and Programme of Action on the Culture of Peace.