Statement by H.E. Mr. Mher Margaryan, Permanent Representative of Armenia to the United Nations, at the 9132nd meeting of the Security Council 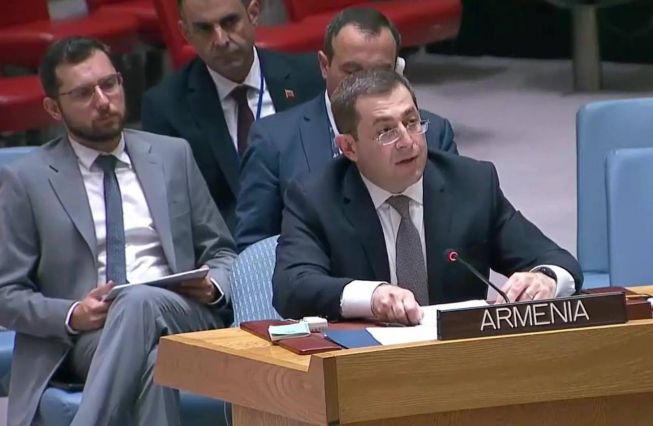 I would like to express appreciation to the French presidency for convening today’s emergency meeting, upon the request contained in the letter of the Foreign Minister of Armenia. The meeting is taking place at a grave time for my country, as acts of criminal aggression have been perpetrated against the territorial integrity of the Republic of Armenia, in flagrant violation of the international law and the UN Charter.

The perpetrator does, indeed, have a name - Azerbaijan, Armenia’s neighbour to the East, who is multiple times larger in territory, population and resources, and whose pervasive record of hostile conduct, rhetoric and unchecked, disproportionate violence demonstrates a most dangerous pattern of utter disregard for every tenet and norm of the international law and reveals a clear intention to instigate wars, destruction and instabilities in the region.

In the early hours of 13 September, Azerbaijan initiated a major military offensive targeting the eastern and south-eastern regions of Armenia with the use of a wide range of weaponry, including artillery and combat UAVs. The offensive took lives of 105 people, left dozens wounded, dozens missing, and inflicted various forms of material damage, including upon the civilian settlements and infrastructure. The scale of destruction and the intensity of shelling is so high, that, at the moment, we have only initial figures. Around 200 homes of civilians have suffered serious damage, with more than 60 of them completely destroyed.

For a few consecutive days, a number of densely populated towns of Armenia, including Goris, Jermuk, Vardenis, Kapan and Sotk came under heavy fire. The latest reports indicate that the offensive has displaced at least 2750 people in Gegharkunik, Vayots Dzor and Syunik Provinces, which include 370 children and 55 persons with disabilities among those displaced. The shelling of the resort town of Jermuk, which has absolutely no military targets is nothing short of war crime, and so are the strikes against the Kechut water reservoir, with potentially catastrophic human toll and environmental impact.

In flagrant violation of the Geneva Conventions and international humanitarian law, at least 7 identified Prisoners of War have been captured, with video evidence suggesting there could be more captives held by Azerbaijan. The offensive targeted journalists, both local and foreign, who were carrying out their work covering the events.

We have often reflected within the United Nations and in this chamber on the challenges for justice and accountability. In doing so, we are constantly reminded that impunity for the past crimes can lead to the most serious violations in the future, the ultimate manifestation of which are genocide, war crimes and crimes against humanity. Advancing early warning and accurate reporting capacities of the United Nations to monitor and respond includes identifying the systematic policies of promulgating hate speech, incitement and glorification of violence on the basis of ethnicity or religion, in particular, when such policies are state led.

Over the past year, we have repeatedly brought it to the attention of this Council that Azerbaijan has been engaging in the illegal practice of acquisition of territories by force, having duly reported such acts of aggression under Article 51 of the UN Charter.

Through the letters dated 14 May, 29 July and 16 November 2021, Armenia alerted the members of the Council about Azerbaijan’s persistent violations of the norms and principles of the international law, as well as the provisions of the Trilateral Statement of 9 November 2020 on the establishment of ceasefire and cessation of hostilities following the 44-day war in 2020. The latest attacks come to demonstrate that, in the absence of proper accountability measures, policies of aggression are likely to continue and even increase in scope and scale.

It also follows that, emboldened by the results of the use of force in the past, Azerbaijan now seeks to normalize violence and aggression to capture territories by force. During the past two days, Azerbaijan has intruded and then occupied over 10 sq km of the sovereign territories of Armenia. This attack follows the offensives in May and November 2021, when Azerbaijan occupied around 45 sq km of sovereign land of my country.

The actions of Azerbaijan are in blatant violation of the Purposes and Principles of the Charter of the United Nations, in particular Article 2.4 of the Charter, in violation of the OSCE Helsinki Final Act, in violation of the International Humanitarian Law. Moreover, the military aggression of Azerbaijan goes against the letter and spirit of the Trilateral Statements of November 9, 2020, and November 26, 2021. The latter, in particular, stipulates that the sides agreed to “take steps to increase the level of stability and security on the Azerbaijani-Armenian border…”.

I should particularly underline that this act of aggression occurred in the context of peace negotiations conducted in various fora and facilitated by different actors. Armenia has engaged in all these processes in good faith, with the aim of stabilizing the situation in the South Caucasus. Armenia has publicly undertaken to work towards a peaceful region and declared its readiness to launch negotiations towards a peace agreement. This aggression is the answer of Azerbaijan to the mediation efforts of the international community.

As we speak, we are receiving reports that the fragile ceasefire is under threat. There are credible reports that Azerbaijan is planning yet another military offensive by widening the geography of the aggression, including from the direction of Nakhijevan, to realize the unlawful ambitions of Azerbaijan towards establishing an extraterritorial corridor through the sovereign territory of Armenia.

The representative of Azerbaijan is here to offer justifications for their country’s predatory conduct. Make no mistake: there is none, at least, not under international law. For all the talk about manufactured pretexts like “Armenia’s provocations”,  “occupation” or “Azerbaijan’s right to self-defense” and “counterattacks”, the truth is that no actual armed attack has been initiated by Armenia.

We understand that, for many years, blame game and speculation have been Azerbaijan’s best friends, and that it is precisely for this reason that Azerbaijan has been so vehemently opposing any idea leading to the creation of internationally monitored verification mechanisms to identify ceasefire violations. Such measures, if established, would be instrumental to ending blame game. They would be critical to helping to sustain ceasefire so that peace and diplomacy get a chance.

Today’s acts of aggression are, in reality, nothing short of the product of an intentional decision to walk away from the Nagorno-Karabakh negotiations and to opt for a military solution to the conflict. The very fact that a large-scale military aggression was unleashed amidst an unprecedented pandemic in 2020 is a crime of global proportion in itself and should be evaluated and addressed, on its own merit, or rather the lack of thereof.

It follows that the use of force and threats have become a distinct pattern of behavior of Azerbaijan in all conflict situations. The claims that Azerbaijan resolved Nagorno-Karabakh conflict by force, abolished all collective rights of people of Nagorno-Karabakh and even eliminated the very name of this Armenian populated land are illustrative to this end.

Armenia is well aware of the challenges and complexities that the present-day international politics has to offer. We are equally cognizant of the growing energy demand in the world. Having said that, we appeal to the Council to stand up to its responsibility, under the UN Charter, for the maintenance of international peace and security. Azerbaijan is yet to abide by its humanitarian obligations vis-à-vis the Armenian POWs, commit, in good faith, to the preservation of the Armenian cultural and religious heritage, as well as address the anti-Armenian rhetoric, including at the level of public officials and institutions, as rendered by the International Court of Justice through the Provisional Measures issued against Azerbaijan under the Convention on Elimination of Racial Discrimination in December 2021.

We strongly urge the members of the Security Council to remain seized of the matter and to come up with tangible outcome after the discussions in this Emergency meeting.

- With strong condemnation of the unprovoked aggression of Azerbaijan against the sovereign territory of the Republic of Armenia;

- Demanding immediate and unconditional withdrawal of its forces from the sovereign territory of Armenia;

- Demanding to refrain from any future acts of aggression against the territorial integrity of Armenia and fully comply with its international obligations and commitments, including the UN Charter, Helsinki Final Act and Trilateral Statements;

- Urging to engage peacefully in the negotiation process including on issues resulted  from and related to the Nagorno-Karabakh conflict, including that of the status.

- Calling to release and repatriate all Armenian Prisoners of War, indicating that the contrary constitutes a violation of International Humanitarian Law.