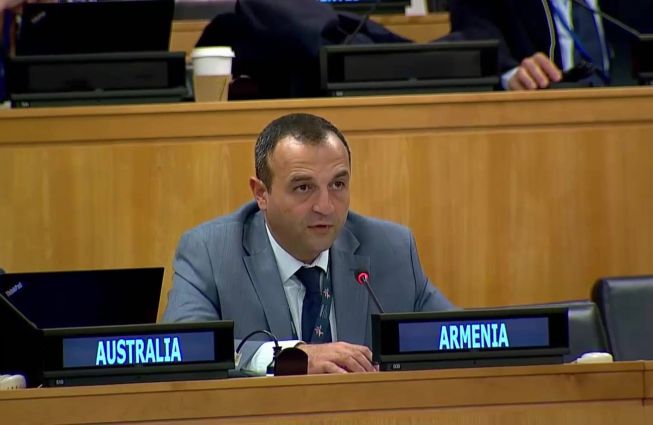 Effective and functioning Conventional Arms Control regime and confidence and security building measures are essential for maintenance of peace and security at international, regional and sub-regional levels. In this regard full implementation of arms control agreements and adherence to the guiding principles of the Arms Control regime, namely transparency, sufficiency, verification and limitation, are of utmost importance for ensuring military stability, predictability and reducing the risk of conflicts or escalation of tensions.

For decades Armenia has been fully compliant with its legally binding obligations and political commitments under the Treaty on the Conventional Armed Forces in Europe and Vienna Document on Confidence-and-Security-Building Measures, including those related to arms limitations, on-site inspections and information exchange.

Armenia has consistently expressed its strong concerns regarding systematic violations of the Conventional Arms Control regime by Azerbaijan, in particular massive accumulation of heavy weaponry, significant exceeding of the CFE ceilings, exclusion of a large portion of armed forces from verification regime, political preconditions for receiving inspections and unnotified large-scale military exercises, in violation of Vienna Document. These actions have seriously undermined the arms control regime and led to deterioration of the regional peace and security in the South Caucasus.

The lack of adequate and strong reaction of the international community to the destabilizing and unabated military build-up by Azerbaijan have created a fertile ground for Azerbaijan to pursue a policy of use of force against Nagorno-Karabakh and Armenia.

Open and blatant disregard by Azerbaijan of its obligations on the conventional arms control and regional CSBMs culminated in the premeditated large-scale aggression against the people of Nagorno-Karabakh in the fall of 2020 amidst the global pandemic. The scale of the aggression and the preceding preparations, such as the regular unnotified military exercises conducted by Azerbaijan clearly indicated that the aggression was well prepared. Azerbaijan widely used all types of heavy weaponry, including multiple launch rocket systems, artillery, missiles, military aircraft and prohibited weapons, such as cluster munitions and incendiary weapons, accumulated for decades to target the civilian population and infrastructure and commit war crimes and atrocities.

In the aftermath of the conflict, the security situation in our region continues to remain fragile due to uncontrolled military buildup, persistent aggressive rhetoric, violations of ceasefire, open territorial claims against Armenia and denial of very existence of Nagorno-Karabakh.

On 13 September 2022, Azerbaijan launched a military aggression targeting the eastern and south-eastern regions of Armenia, causing more than 200 deaths including among the civilian population. The massive concentration of troops and intensity of the use of a wide range of heavy weapons revealed the premeditated nature of the large-scale offensive. The Azerbaijani armed forces almost on a daily basis resort to military provocations and ceasefire violations.

Armenia attaches high importance to the activities of international and regional organizations to conduct monitoring, assessment and fact-finding missions, within their respective mandates, aimed at prevention of acts of aggression as means of conflict resolution and further deterioration of security in our region.