Statement by Mr. Tigran Galstyan, First Secretary of the Permanent Mission of Armenia, at the UNGA77 Third Committee General Discussion 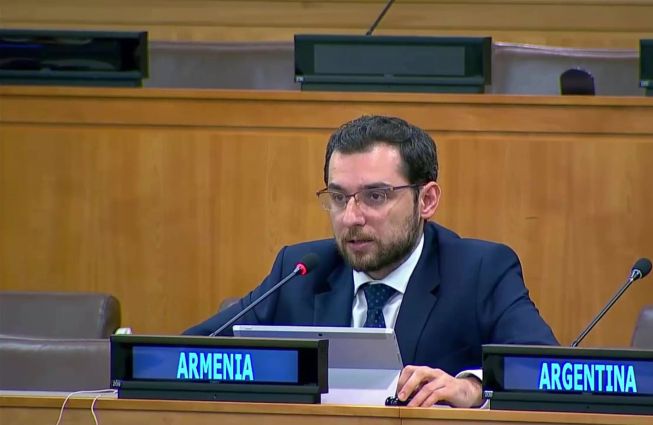 Respect for and protection of all - collective and individual - human rights and fundamental freedoms is indispensable for promoting tolerance and non-discrimination within and between our societies. Political leaders, academia, civil society and media bear special responsibility in this regard. Political debate, freedom of opinion, vibrant civil society, and free media: these are key elements that raise society’s level of protection against hate propaganda and indoctrination. This is why the respect of fundamental freedoms is essential in countering racism, racial discrimination, xenophobia and related intolerance.

Incitement to hatred and hate crimes, denial, justification or glorification of past crimes constitute detectable early warning signs, which, if unaddressed, pave the way for future atrocities. Hate speech targeting ethnic and religious groups often represents the underlying cause of violence and conflicts.

The Armenian people know firsthand the grave consequences of state-led xenophobia and hate propaganda. A century after falling victim to a devastating genocide, the Armenian people continue to face incitement of identity-based hatred in the region. International and regional organizations, non-governmental organizations have extensively documented state-led hate-propaganda at all levels in neighbouring Azerbaijan based on distorted historical narratives, denial of the very existence of the Armenian people in their ancestral homeland, as well as glorification of hate crimes against Armenians. A source of particular concern is the indoctrination of youth and involving of children in state-sponsored propaganda of anti-Armenian hatred via educational programs.

During the recent aggression of Azerbaijan against the Armenian sovereign territory in mid-September we have seen the consequences of this indoctrination with multiple confirmed cases of summary executions of prisoners of war, body mutilations, gender-based violence that were cheered and glorified in social media mostly by young people, but not only.

To hold perpetrators accountable, Armenia instituted proceedings against Azerbaijan before the International Court of Justice with regard to violations of the International Convention on the Elimination of All Forms of Racial Discrimination, which are now undergoing.

As of today, policies of dehumanization of people of particular ethnicity remain as a serious threat to the peace and security in the region and should be unequivocally condemned and effectively addressed at all levels. Unfortunately, we often observe politicized and selective condemnations and outrages omitting some serial violators of human rights. This selective and restrained approach on the part of some countries, who champion for human rights globally, is a source of grave concern for the integrity and objectivity of the entire human rights discourse.

Armenia is committed to the agenda of protection and promotion of human rights and attaches, in this regard, special importance to the international protection of collective human rights, namely the respect for the principle of equal rights and self-determination of peoples, as enshrined in the UN Charter. The International Covenants on Political and Civil Rights and on Economic, Social and Cultural Rights, empower people to freely determine their political status and freely pursue their economic, social and cultural development, reflecting the strong interlinkage between the universal realization of the right to self-determination and the exercise of human rights and fundamental freedoms.

Any attempt to suppress by use of force the aspirations of the people to live in freedom and dignity should be viewed as a challenge to the purposes of this Organization and as gross violation of human rights, and be firmly rejected by the international community. Armenia will consistently stand for protection of the right of peoples to determine their own future free from fears, violence and oppression.