Statement by H.E. Mher Margaryan, Permanent Representative of Armenia to the UN, at the UN Security Council high-level open debate on “Protection of objects indispensable to the survival of the civilian population” 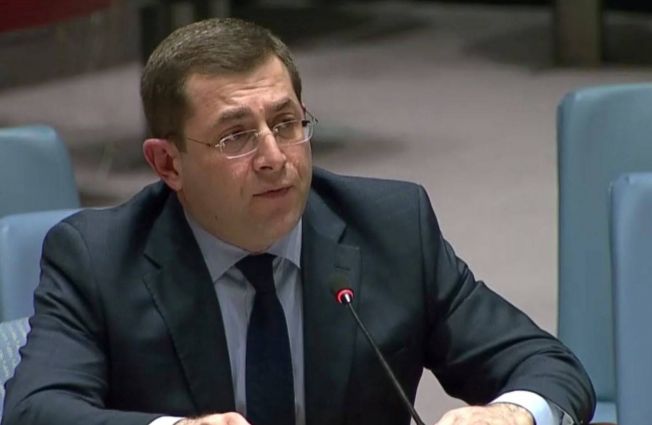 I would like to thank the Presidency of Viet Nam for organizing the open debate on the topic of “Protection of objects indispensable to the survival of the civilian population”. I also thank Under-Secretary-General Mark Lowcock, President of the International Committee of the Red Cross Peter Maurer and Chair of the International Peace Institute Kevin Rudd for highlighting the challenges of protection of critical civilian infrastructure in situation of armed conflicts and humanitarian emergencies.

Armed conflicts accompanied with massive use of heavy weaponry and indiscriminate attacks on residential areas can have devastating impact on the civilian infrastructure, critical for the survival of civilian population. In times of the COVID-19 pandemic, large-scale military hostilities and targeting of healthcare institutions, electricity networks and water pipelines undermine the ability of authorities to respond to the spread of the disease in the conflict-affected areas.

The international humanitarian law and the international human rights law shape a crucial framework for the effective protection of civilian population and infrastructures. Armenia attaches utmost importance to full compliance by all parties to conflicts with their obligations under Geneva Conventions and their Additional Protocols without any political preconditions. Any attempts to politicize humanitarian assistance to the population in need should be identified and addressed by the international community.

While in many parts of the world the Secretary-General’s call for a global ceasefire has been instrumental for reducing of tensions, in our region, the pre-planned large-scale war launched by Azerbaijan in September 2020, with the direct support of Turkey and involvement of foreign terrorist fighters, has been the biggest military escalation in times of pandemic. From the first day of the hostilities, the Azerbaijani armed forces launched deliberate and indiscriminate attacks on the civilian objects, residential buildings, and infrastructure in 170 communities of Artsakh, including the capital city Stepanakert, as well as in Martakert, Shushi, Martuni and Hadrut, causing injuries, loss of lives and displacement of thousands of people and inflicting a major humanitarian crisis.

Throughout its offensive Azerbaijan widely used all types of heavy weaponry, including multiple launch rocket systems, artillery, missiles, various types of UAVs and military aircraft and prohibited weapons, such as cluster munitions and incendiary weapons to conduct targeted attacks on the civilian population and infrastructure, in gross violation of the international humanitarian law. Deliberate air bombardments, artillery and missile strikes heavily damaged a number of medical facilities, including the maternity ward of Stepanakert’s Maternal and Child Health Center, the hospital in Martakert. Targeted attacks were carried out also on educational institutions, which led to the destruction of 18 schools and 6 kindergartens in Artsakh, depriving 28 thousand children of their right to education. The violations of humanitarian law by Azerbaijan have been widely documented by various international humanitarian and human rights organizations, including the Human Rights Watch.

In blatant disregard of the calls of the international community, including the OSCE Minsk Group Co-Chairs and the UN Secretary-General to immediately cease hostilities and in violation of three consecutive agreements on humanitarian ceasefire, Azerbaijan continued massive attacks on the civilians and civilian infrastructure of Nagorno-Karabakh with the aim of making life in Nagorno-Karabakh impossible, as a clear demonstration of genocidal intent of its aggression.

The genocidal intent was also manifested in the deliberate destruction of the Armenian churches, shrines and cultural monuments by the armed forces of Azerbaijan. Notable examples of such policy is the targeted destruction of Armenian cathedrals, including the Holy Saviour Ghazanchetsots Cathedral and the Armenian Church of St. John the Baptist in Shushi, which continued even after the establishment of ceasefire.

The humanitarian crisis caused by the armed aggression of Azerbaijan was further exacerbated by the spread of the coronavirus disease in Nagorno-Karabakh. Azerbaijan’s deliberate and targeted attacks inflicting heavy damage on healthcare institutions, water and gas pipelines, severely limited the capacities of the authorities of Artsakh to contain and respond to the pandemic.

In the aftermath of the agression, hundreds of cluster bomblets and sub-munitions and other explosive remnants of war spread across civilian settlements and agricultural lands continue to cause serious security risk to the lives of civilians, with a long-lasting adverse effect on the humanitarian and socio-economic situation in Nagorno-Karabakh.

Armenia appreciates the activities of the International Committee of the Red Cross and the Humanitarian Response Centre of the peacekeeping forces of the Russian Federation, which have been critical for addressing the immediate life-saving needs of the conflict-affected population. It remains a crucial priority to ensure adequate rehabilitation of the damaged infrastructure, such as the medical facilities, water systems, power networks and communication lines and to address the issue of extensive contamination by explosive remnants of war to deliver comprehensive and long-term humanitarian response.

Azerbaijan attempts to weaponize the issue of safe and unhindered humanitarian access of the UN agencies to the Nagorno-Karabakh conflict zone are not compatible with the fundamental humanitarian principles and are explicitly aimed at undermining the international efforts to conduct comprehensive assessment of the humanitarian, protection and early recovery needs and human rights situation of the affected population.

We reaffirm the imperative of acting in full compliance with the obligations under the international humanitarian law and ensuring safe and unimpeded humanitarian access of the UN to Nagorno-Karabakh, in line with the principles of humanity, neutrality, impartiality, and independence.