Statement by H.E. Mher Margaryan, Permanent Representative of Armenia to the UN, at the UN Security Council VTC Meeting “The impact of the COVID-19 pandemic on the international efforts to prevent and counter terrorism and violent extremism” 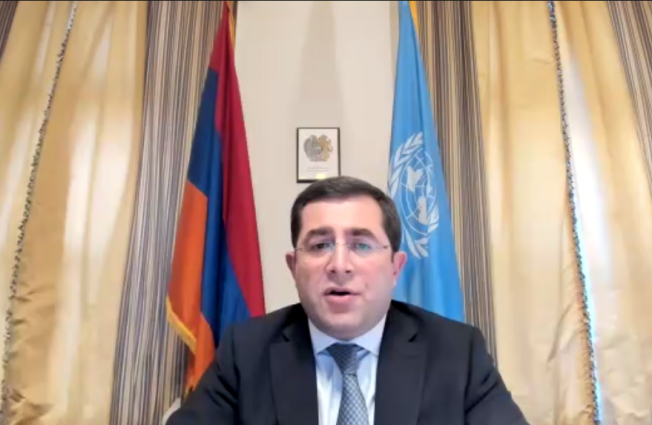 We thank the Permanent Mission of Tunisia and the cosponsors for convening the Arria Formula meeting on the topic of the pandemic and its impact on efforts of the international community to counter terrorism and violent extremism. I would like to thank the briefers, the Assistant Secretary-General and Executive Director of the CTED Ms. Michèle Coninsx and the Coordinator of the Analytical Support and Sanctions Monitoring Team Mr. Edmund Fitton-Brown for their valuable remarks.

Indeed, the crisis caused by the COVID-19 pandemic has complicated the efforts of the international community to address the complex challenges posed by the threat of terrorism and violent extremism. The pandemic has triggered a considerable rise of xenophobia and hate speech, creating fertile soil for the virulent seeds of extremism and terrorism

In situations of state-led and state-sponsored radicalization of society, violent ideologies of incitement carry the risk of a most destructive and destabilizing potential on the grounds of identity-based hate crimes that target ethnic and religious groups.

Amidst the outbreak of an unprecedented global pandemic, in September last year,  thousands of foreign terrorist fighters were employed in the large-scale military aggression against Nagorno-Karabakh.

The recruitment of foreign terrorist fighters from the Middle East and their transfer to Azerbaijan and Nagorno-Karabakh conflict zone has been extensively documented and acknowledged by the law enforcement agencies of several countries, as well as reported extensively by independent observers and media outlets. UN Working Group on the use of mercenaries as a means of violating human rights and impeding the exercise of the right of peoples to self-determination in its statement of 11 November 2020 referred to the “widespread reports that the Government of Azerbaijan, with Turkey’s assistance, relied on Syrian fighters to shore-up and sustain its military operations in the Nagorno-Karabakh conflict zone, including on the frontline”.

In the aftermath of the military hostilities, the leadership of the neighboring country has continued to pursue its policy of instigating violence and Armenophobia. Among the most outrageous instances of dehumanization of the ethnic Armenians is the inauguration of the so-called “military trophy park” in Baku displaying wax mannequins of dying or captured Armenian soldiers, their helmets and personal belongings. The celebration of a most denigrating and dehumanizing imagery depicting murdered servicemen, so awfully reminiscent of the Nazi-era propaganda is an ultimate reflection of the extreme level of radicalization and hatred.

Within the Counterterrorism architecture of the United Nations the Security Council sanctions committees, play an important role in ensuring accountability for terrorist entities and individuals, assessment of the evolving global terrorism threat and monitoring compliance of the member states with the sanction regimes.

We would like to encourage stronger cooperation and coordination between the Counter-Terrorism Committee, its Executive Directorate, the Office of Counter-Terrorism and other relevant UN bodies in order to ensure efficient and integrated response to new and emerging global threats and assisting the member states in the implementation of their commitments on preventing and countering terrorism and violent extremism.