Statement by H.E. Mr. Mher Margaryan, Permanent Representative of Armenia to the United Nations, at the UNGA 76 Third Committee/General Debate 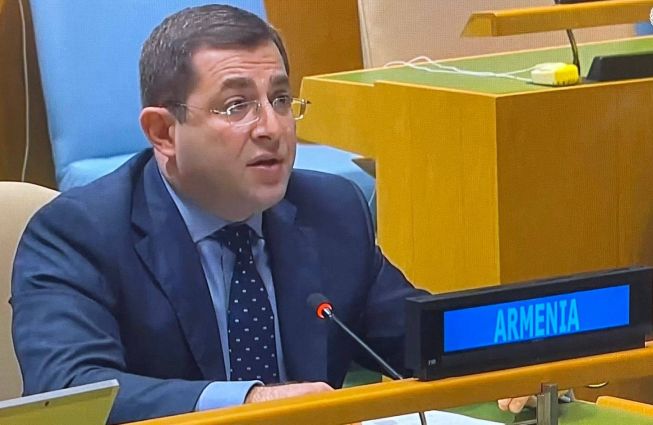 I congratulate you and the members of the Bureau on assuming the leadership of the Third Committee and wish you much success in guiding its work in course of the 76th session of the General Assembly.

The global crisis caused by the COVID-19 pandemic and the related challenges have demonstrated, once again, that the human rights and fundamental freedoms must be at the center of the response and recovery efforts, as the pandemic continues to disproportionately affect those most vulnerable. Inclusive, people-centered and human-rights based response of the international community remains crucial to ensure everyone’s protection and enjoyment of the basic human rights, without undue politization, in line with the collective pledge of leaving no one behind.

30 years ago, the people of Armenia voted in referendum to regain their independence embarking on the path of building representative and accountable democratic institutions, promoting rule of law, and upholding human rights. Despite all challenges, today, free and fair elections, protection of fundamental freedoms, free media, empowerment of women, independent institutions of protection of human rights and vibrant civil society are an irreversible reality in Armenia.

Effective protection and promotion of human rights lie at the core of the programmes and policies of the Government of Armenia, as consolidated by the ongoing implementation of the Strategy and Action Plan for the Protection of Human Rights for 2020-2023.

Today, Armenia is one of the few signatories of the 18 core international human rights instruments, having successfully ratified 16 of them, including, most recently, the optional protocols of the International Covenant on Civil and Political Rights and the Convention on the Rights of the Child.

Armenia prioritizes women’s equal and meaningful participation in public life, as well as attaches particular importance to the economic empowerment of women and introduction of gender-responsive social protection systems. Following the snap elections this summer, the Armenian Parliament reached a record 34 percent of women’s participation, which was an important achievement for promoting political participation of women at the decision-making level.

As a leader of the "Technology and Innovation for Gender Equality" Action Coalition of the "Generation Equality" Forum, Armenia will promote meaningful access of women and girls to digital technologies and universal digital literacy with a view to bridge the gender digital divide.

The outcome documents of 64th and 65th sessions of the Commission on the Status of Women, which I had the honour to chair, provide a number of articulate, action-oriented policy recommendations to accelerate the realization of the objective of achieving gender equality, to which Armenia is fully committed.

We support efforts towards strengthening the prevention capacity of the United Nations and regional organizations for timely identifying of and adequately responding to the warning signs of gross violations of humanitarian law and human rights law. Promulgation of hate speech, and incitement to violence on the basis of ethnicity and religion creates an environment conducive to genocide, crimes against humanity and other atrocity crimes. Such practices must be effectively identified and addressed at all levels.

As a strong supporter of the mutually reinforcing agendas of the protection of human rights and the prevention of crimes against humanity and mass atrocities, Armenia is committed to effective international cooperation to counter racism, xenophobia and hate speech – important priorities that define Armenia’s multilateral engagement, also throughout our membership in the UN Human Rights Council.

The cornerstones of the international human right law, the Covenants on Political and Civil Rights and   on Economic, Social and Cultural Rights, empower people to freely determine their political status and freely pursue their economic, social and cultural development, reflecting the strong interlinkage between the universal realization of the right to self-determination and the exercise of human rights and fundamental freedoms.

The aggression unleashed against Nagorno-Karabakh (Artsakh) on 27 September last year with the involvement of foreign terrorist fighters and mercenaries was accompanied by massive and grave violations of human rights and international humanitarian law, including, extrajudicial executions, torture and inhuman treatment of prisoners of war and civilian hostages, mass-displacement and destruction and desecration of monuments of religious, cultural and historical heritage.

The large-scale military aggression, which aimed to suppress the right to life, right to development and other fundamental human rights, has only increased the legitimacy of human aspirations towards full realization of the right to self-determination.

Armenia will consistently stand for the restoration and protection of the rights of the people of Artsakh, including their right to freely determine their own future free from fears, violence and oppression.

Attempts to suppress the legitimate aspirations of the people, by use of force should be viewed as gross violation of human rights, in particular the right to self-determination, and firmly rejected by the international community.

We look forward to an active and constructive dialogue within the Committee to further build up on our collective commitments in regard to upholding and promoting universal and indivisible human rights and fundamental freedoms for all.