Statement by H.E. Mher Margaryan, Permanent Representative of Armenia to the UN, at the UN Security Council open debate on “Protection of Civilians in Armed Conflict” 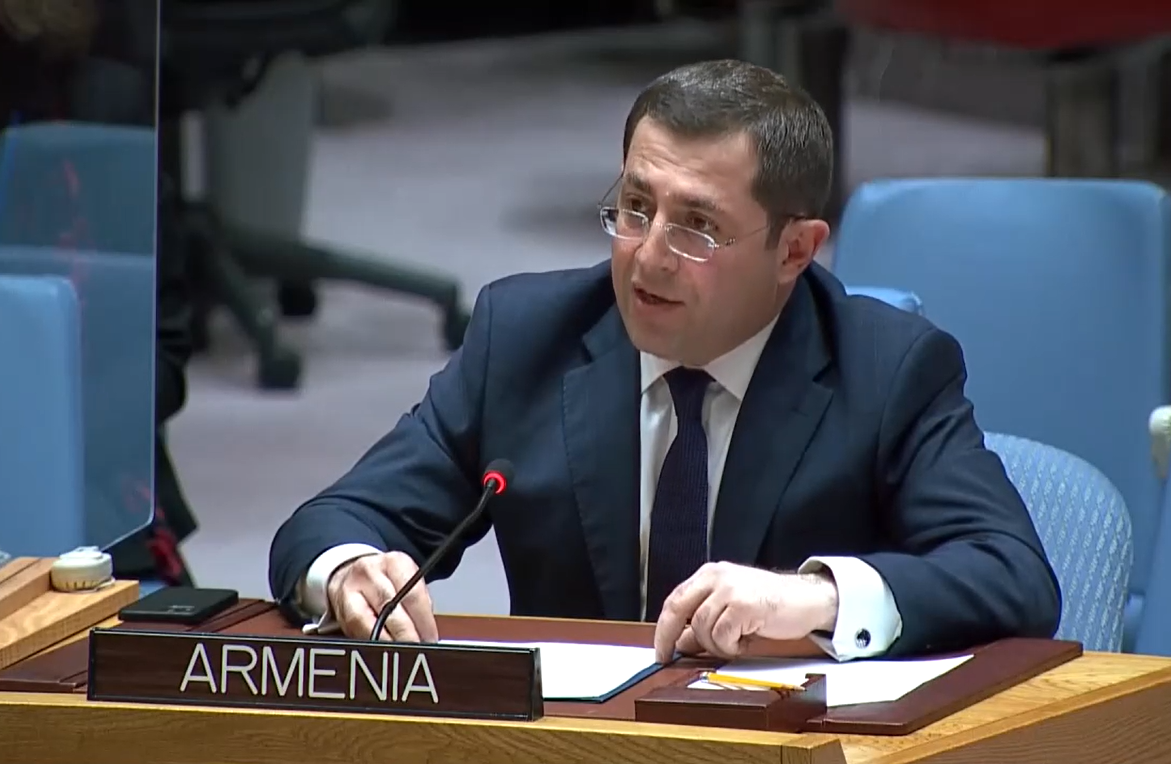 I would like to express my appreciation to the United States delegation for convening the Security Council open debate on the subject of the protection of civilians in armed conflict.  I thank today’s briefers for outlining the pressing humanitarian challenges and vulnerabilities that continue to persist in various parts of the world.

Having evolved out of history of human experiences of crisis and calamities, the topic of today’s debate is central to addressing the very many challenges and disturbing realities we continue to face. The international humanitarian law and the international human rights law shape a crucial framework for the effective protection of civilian population and infrastructures, and, in this context, we stress the utmost importance of full and unconditional implementation of the Geneva Conventions and their Additional Protocols.

Armenia remains committed to protect education from attack, in line with the Safe Schools Declaration, as well as the provisions outlined in the Paris Principles and the Vancouver Principles, which our country has endorsed.

In our part of the world, we continue to face the humanitarian consequences of the premeditated military attack, which Azerbaijan has openly admitted to have initiated in the fall of 2020 amidst an outbreak of an unprecedented global healthcare crisis resulting in thousands of casualties, displacement, destruction of livelihoods and critical civilian infrastructure.

The military aggression against Nagorno-Karabakh was extensively accompanied with most disturbing instances of violations of humanitarian law, as reported and documented by various human rights institutions. In April this year, under the GA agenda items on Prevention of armed conflict, Elimination of racism, racial discrimination; Rights of peoples to self-determination; The responsibility to protect, the prevention of genocide, war crimes, ethnic cleansing and crimes against humanity and as a document of the Security Council we circulated the Interim Report of the Human Rights Defender of Nagorno-Karabakh, which provides evidence about targeted attacks on the civilian population and various manifestations of violation of the rights of the people of Artsakh by Azerbaijan. Amnesty International, in its recent report published last week, revealed the magnitude of the disproportionate impact upon the older ethnic Armenian population, who became particular targets of war crimes by the Azerbaijani military forces, including extrajudicial killings and torture in detention.

The systematic violent acts and provocations that seek to disrupt the normalcy of life in the border areas extend to deliberate arsons of pastures, indiscriminate shootings, cattle-raiding, disruption of gas supply and other forms of hostile conduct intended to intimidate the civilians and deprive them of their basic human rights. Equally disturbing are the attempts to instrumentalize the issue of POWs and civilian captives, whose return Azerbaijan continues to deny, in violation of the Geneva Conventions, and in defiance of the Provisional Measures issued by the International Court of Justice as a matter of urgency on 7 December 2021.

The persistent aggressive actions accompanied with violent rhetoric of open military threats, distorted interpretations of history, incessant territorial claims and manipulative reversals of agreed commitments should be a matter of concern to the international community.

The obstruction of safe and unhindered humanitarian access of the UN agencies to the Nagorno-Karabakh conflict zone continues to undermine efforts for comprehensive assessment and long-term humanitarian response to the needs of the civilian population.

In delivering relief and assistance in situations where the right to life and human dignity are under imminent threat it remains a critical priority for the United Nations system to adequately address in a timely manner the issue of humanitarian access to the people on the ground without discrimination, and leaving no one behind.