Statement by H.E. Mher Margaryan, Permanent Representative of Armenia to the UN, at the UN Security Council open debate on “Strengthening accountability and justice for serious violations of international law” 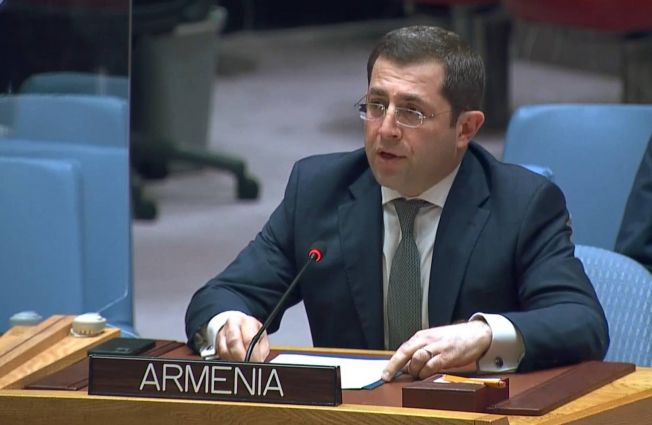 I would like to congratulate Albania on assuming the Presidency of the Security Council and to express our appreciation for the participation of Prime Minister of Albania H.E. Edi Rama during today’s debate. I thank the President of the International Court of Justice Joan Donoghue, the High Commissioner for Human Rights Michelle Bachelet and other briefers for their insightful remarks.

As we reflect on the challenges for justice and accountability in upholding international law, we are reminded that impunity for the past atrocities can lead to the most serious violations, the ultimate manifestation of which are genocide, war crimes and crimes against humanity. We are equally reminded that strengthening accountability and justice for such crimes is essential for the realization of the rights to truth, justice, reparation and guarantees of non-recurrence.

As a long-standing advocate of genocide prevention agenda, Armenia supports efforts towards advancing early warning capacities of the United Nations to monitor and respond to conditions with imminent risk of atrocities, which includes systematic policies of promulgating hate speech, incitement to violence on the basis of ethnicity or religion, as well as denial, justification or even glorification of atrocity crimes, in particular, when such incendiary acts are state led, conducted or cultivated at the highest political level.

Time and again, Armenia alerted the international community about the dangerously mounting level of hate speech and racist rhetoric dominating the political discourse in Azerbaijan where state-led anti-Armenian policies - extensively reported and documented by international institutions - seek to dehumanize one particular nation, which come to manifest that genocidal ideology does not merely belong to the past.

The fact that a large-scale military aggression was unleashed amidst the unprecedented global pandemic in the fall of 2020 is a crime of global proportion in itself and should be evaluated and addressed as such. The attempt to resolve the Nagorno-Karabakh conflict by use of force, caused thousands of deaths and devastation, putting the lives of tens of thousands of civilians under existential threat.

Azerbaijan is yet to abide by its obligations under the international humanitarian law vis-à-vis the Armenian POWs and civilian hostages who continue to be held in captivity. It should commit, in good faith, to the preservation of the Armenian cultural and religious heritage and effectively address anti-Armenian rhetoric including at the level of public officials and institutions, in accordance with the provisions stemming from the Convention on Elimination of Racial Discrimination.

As the principal judicial organ of the United Nations, the International Court of Justice has a central role in ensuring justice and accountability and upholding the faith in international law.

Armenia remains strongly committed to strengthening accountability and justice agenda, which necessitates in-depth understanding of the patterns of past as well as recuring violations and a victim-centered approach, particularly in conflict situations.