Statement by H.E. Mher Margaryan, Permanent Representative of Armenia to the UN, at the UN Security Council open debate entitled “The promotion and strengthening of the rule of law in the maintenance of international peace and security" 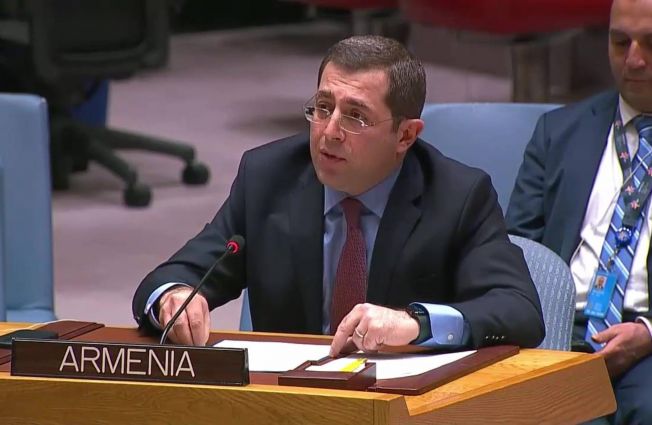 I would like to congratulate Japan on assuming the membership in the Security Council and the Presidency for the month of January. We express our appreciation for the presence of Minister for Foreign Affairs of Japan and thank also the UN Secretary-General, the President of the International Court of Justice and Professor Akande from Oxford University for their important contributions to today’s debate.

As we reflect on the challenges for the promotion of the rule of law in the maintenance of international peace and security, we are reminded that, upholding the rule of law is essential for the realization of the rights to truth, justice, reparation and guarantees of non-recurrence. We are equally reminded that more often than not, it is the lack of accountability that breeds more violations. As the principal judicial body of the United Nations, the International Court of Justice has a central role in promoting justice and accountability and upholding the faith in the rule of law among nations.

Strengthening adherence to the norms and principles of the international law requires concerted efforts to ensure that grave violations do not go unpunished. Armenia is committed to efforts to effectively address and combat impunity, having recently launched the process of ratifying the Rome Statute of the International Criminal Court. Likewise, Armenia supports elaboration and adoption of a universally accepted treaty on preventing and punishing crimes against humanity and we welcome the recent progress achieved in this regard in the Legal Committee of the General Assembly.

Time and again, Armenia has alerted the international community on the instances of gross violations of international law in our part of the world. We have repeatedly brought it to the attention of this Council that Azerbaijan has been engaging in the illegal practice of acquisition of territories by force, having duly reported such acts of aggression under Article 51 of the UN Charter.

We have consistently alerted the members of the Council that, emboldened by the results of the use of force in the past, Azerbaijan now seeks to normalize violence and aggression to impose unilateral solutions and conduct the policy of ethnic cleansing in Nagorno-Karabakh.

The latest such example is the ongoing blockade of the Lachin corridor – the only supply route in and out of Nagorno-Karabakh - in grave violation of the existing obligations under the Trilateral Statement of 9 November 2020 and the international humanitarian law. Among numerous violations of norms of the international law, the blockade of the Lachin corridor also challenges the ICJ order, namely, the provisional measure “to refrain from any action which might aggravate or extend the dispute before the Court or make it more difficult to resolve”.

On 20 December 2022 the Security Council held an emergency meeting to address the humanitarian situation in Nagorno-Karabakh. We appreciate the publicly expressed calls by the Council members to restore the free and secure movement along the Lachin corridor and to respect the previously reached agreements and resolve the differences through peaceful means.

Obviously, the inability to adopt a unanimously agreed outcome following the emergency meeting of the Council has prompted the serial violator of all norms of humanity and international law to brand it, and I quote from their official sources - a “diplomatic success of Azerbaijan” and a “New Year gift from the President of Azerbaijan to his people”. Isn’t it an affront to the collective conscience of this body responsible for the maintenance of the international peace and security?

For more than thirty days now, the safe and unimpeded passage of people and goods continues to be denied, children remain separated from their families, electricity and Internet are cut off, while food stamps are introduced to address the immediate needs of a besieged population of 120,000 people.

Whatever the deceptions or misconceptions the leadership of Azerbaijan and their enablers may diligently fabricate, the fact of the matter is that there is only one side that is characterized by pervasive hate speech, with public figures and government officials frequently inciting ethnic hatred against Armenians, as reflected in the latest conclusions of the UN Committee on the Elimination of Racial Discrimination.

Only one side has been on record of rewarding a hate criminal and opening an ethnic hatred park with racist mannequins on display, only one side fails to return POWs in flagrant violation of the Geneva conventions and keeps harassing and kidnapping civilians. Only one side keeps violating ceasefire and invading the territory of the other, and there is only one side, whose military commits, cheers and celebrates horrendous war crimes, as ever-mounting disturbing instances of atrocities, including against women, continue to surface in social networks.

Armenia believes in the United Nations, in the purposes and principles enshrined in its Charter; we believe in the basic principles of resolution of conflict derived from the international law; we believe in the integrity and independence of the International Court of Justice and of the International Criminal Court; and we want to believe that this Security Council will live up to its mandate and responsibilities and that it will rise above the ideological differences and conceptual disagreements, for the benefit of justice, the rule of law and human rights and for the sake of freedom, peace and security.

In order to prevent an imminent humanitarian catastrophe from happening, the United Nations should act in a decisive and timely manner to deny the brutal dictatorship of its plans to suffocate and ethnically cleanse the Armenian people of Nagorno-Karabakh, whose only ambition is to live in dignity, in their homeland, free from coercion and any form of foreign domination.