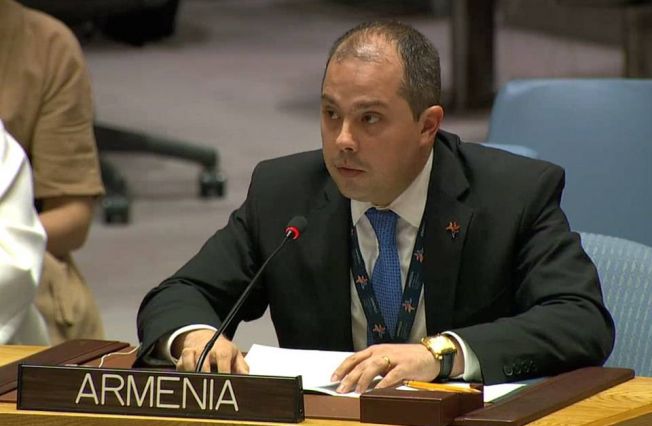 Statement by Mr. Davit Grigorian
Second Secretary of the Permanent Mission of Armenia to the UN

At the UN Security Council Open Debate on “Threats to international peace and security: Linkages between international terrorism and organized crime”
9 July 2019

Terrorism continues to pose significant threat to international peace and stability. Horrific terrorist acts have been perpetrated in many parts of the world throughout recent years. Undoubtedly, enhanced cooperation at both regional and international levels is crucial for countering and addressing multi-faceted threats posed by terrorism and transnational organized crime which quite often appear to be closely interlinked.

We express our support to the Office for Counter-Terrorism in its activity aimed at improving visibility, advocacy and resource mobilization for United Nations counter-terrorism efforts.

We are glad to note the enhanced cooperation with the Counter-Terrorism Committee Executive Directorate. CTED conducted its follow-up visit to the Republic of Armenia in 2018, to assess the implementation of the  UN Security CouncilResolution 1373 and the subsequent counter-terrorism resolutions. Armenia’s relevant national security and law enforcement authorities reaffirmed unequivocal commitment to contribute to fighting terrorism and it’s financing in all its forms and manifestations to ensure further compliance with the counter-terrorism resolutions of the UNSC and in line with CTED recommendations.

Armenia has made considerable efforts to strengthen its antimony-laundering/counter-financing of terrorism (AML/CFT) regime, having conducted a thorough national risk assessment and introduced the National Strategy for Combating Money-Laundering, Terrorism Financing. We have significantly improved our legal framework on terrorism financing and the freezing of terrorist assets.

Armenia has strengthened the operational access to the relevant tools and databases of the International Criminal Police Organization and cooperates in counter-terrorism matters with the relevant regional and international organizations.

We pursue also cooperation with Antiterrorism Center of the CIS, relevant structural units of the CSTO, the OSCE, the Council of Europe, as well as advance collaboration in bilateral format.

We actively participate in the regularly conducted joint operations of the CSTO member states to counter drugs and arms smuggling, ICT related and combating threats stemming from FTFs, which are closely interlinked with terrorist and organized criminal groups.

Relocation of FTFs from Middle East, particularly to the conflict areas in the OSCE and CIS regions, bears serious threat to regional security. FTFs returning from conflict zones in Middle East import their violent practices and disseminate virulent extremist ideas, thus, contributing to radicalization of societies.

The Da’esh style executions and other atrocities are already not limited just to the Middle East. Unfortunately the events in our region in April 2016 came to prove the validity of our concerns.

Armenia reiterates its full commitment to work together with UN relevant bodies and member states to redouble the collective efforts to fight against international terrorism and its links with organized crime whichever form it takes and wherever it happens.