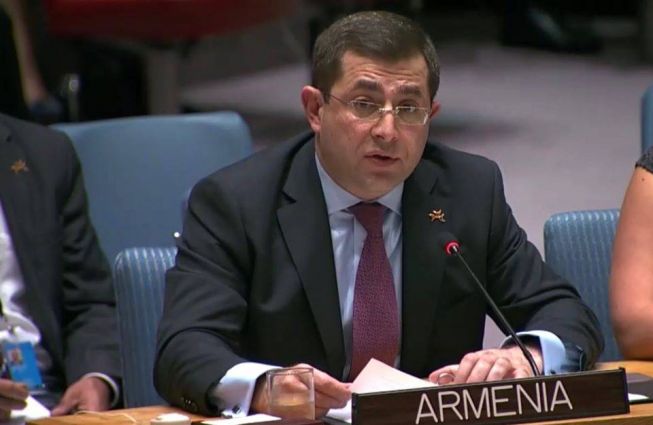 Armenia would like to thank the Polish Presidency for organizing today’s open debate. The participation of H.E. Foreign Minister Jacek Czaputowicz earlier at today’s session demonstrates the high relevance and importance of this humanitarian and human rights issue. We also thank the Special Representative for Children and Armed Conflict Ms. Virginia Gamba, the Executive Director of UNICEF Ms. Henrietta Fore and other briefers for outlining the complexity of the challenges related to the protection of children in armed conflict.

The annual report of the Secretary-General on Children and Armed Conflict reveals the disturbing growth of violence against children. The focus areas of the report, such as recruitment and use of children, abductions, sexual violence and attacks on schools and hospitals are stark reminder of the gravity of the situation and the urgent need of addressing it. Children living in conflict areas are particularly vulnerable due to the lack of humanitarian access. Attempts to isolate people living in conflict areas from the outer world and denying their inalienable human rights should be identified and effectively addressed.

This year marks the 30th anniversary of the UN Convention on the Rights of the Child, one of the most widely endorsed and fundamental treaties for protection and promotion of universal human rights. Armenia continues to prioritize protection of children’s rights, as reflected in our national policies as well as in the framework of our international cooperation.

We closely work with the International Committee of the Red Cross in creating shelters and safe rooms in schools and kindergartens, located in the border regions and also undertake steps to ensure safety of schools in line with Armenia’s commitments under the Safe School Declaration. Armenia’s endorsement of the Paris Principles, the Paris Commitments and the Vancouver principles is yet another reflection of our commitment to promote safety of children. We are also signatory to the Optional Protocol on the involvement of children in armed conflict and we encourage the Member States, who have not yet done so, to join these important instruments.

Regrettably, in our region too, we have witnessed violence against children in conflict situations.

The deliberate indiscriminate targeting by Azerbaijan of civilian population and infrastructures of Nagorno Karabakh and bordering regions of Armenia, including schools, kindergartens and hospitals, has resulted in deaths and injuries among civilians and schoolchildren.

Refusing the creation of an investigative mechanism to identify the cease-fire violations, as agreed within the framework of internationally mandated mediation format of OSCE MG co-chairmanship which would contribute to reducing incidents affecting civilians, including children, is beyond any reasonable justification.

We have been observing an appalling practice of involving children in state-led hate propaganda also through school curricula, in the neighboring country. Such malicious practice of negative stereotyping, fueling hatred on the basis of national identity among children and youth is not only reprehensible and incompatible with the International humanitarian and Human Rights Law, it further undermines efforts to create environment conducive to peace and reconciliation.

Effective protection of children in situations of armed conflict requires strengthened commitment to the implementation of relevant international instruments and necessitates early warning and early action. Supporting free and unimpeded humanitarian access is crucial to prevent and alleviate sufferings of the children caught in conflict.

Today’s open debate once again reminds us that the imperative of protecting children and ensuring their right to life should prevail over political manipulations and distorted narratives.