Remarks by H.E. Mher Margaryan, Ambassador, Permanent Representative of Armenia, on the occasion of the 28th anniversary of the Independence Day of the Republic of Armenia 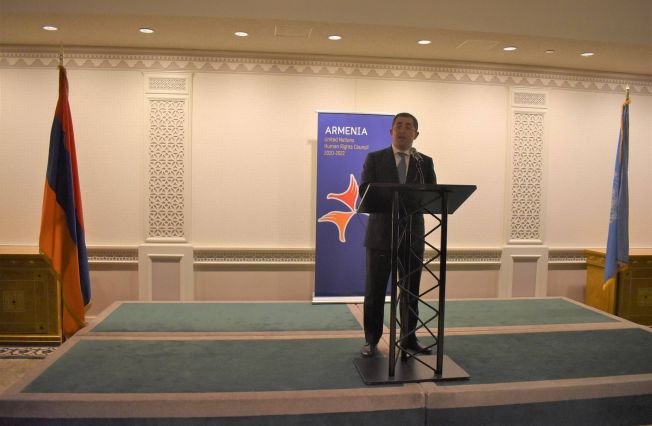 I warmly welcome you and thank you for joining us in celebrating the 28th Anniversary of the Independence Day of the Republic of Armenia. We have decided to bring forward the reception in order not to collude with the preparations of the 74th Session.

The 28 year-old Republic of Armenia is firmly rooted in its millennia-old rich history and heritage. Throughout its history the Armenian people have witnessed Golden age of flourishing of culture, art and science, but also tragic pages of loss of statehood and reaching the verge of annihilation.
Several landmark events had a profound effect on shaping the national identity of the Armenian people. Following the adoption of Christianity as a state religion in 301, and a century later, the invention of Armenian alphabet in 405, our national culture, religion, language became the powerful tools, owing to which Armenia would overcome the existential threats throughout its history.

Historically Armenia found itself in between the Christianity to the West and the Muslim World to the East. Armenia’s cultural interaction with the Islamic civilization contributed to the promotion of diversity and new expressions in art and architecture. Numerous Armenian churches, monuments and other objects of cultural and civilizational heritage erected alongside the Ancient Silk Road from Singapore and India to the Mediterranean are evidence of mutual enrichment of the Armenians with the neighbouring countries and civilizations, as well as with the wider world.

The First World War opened the most tragic page in our history. The Armenian Genocide of 1915, committed under the cover of the hostilities led to the almost entire annihilation of Armenians in western part of their homeland. The establishment of the first Republic of Armenia in May 1918, symbolized revival of the nation after loss of statehood for almost 6 centuries.

In September 1991 the people of Armenia overwhelmingly voted in favour of political independence.
Despite many challenges of the transition period our people’s aspiration to freedom, democracy, dignity, and independence remained steadfast. The peaceful, non-violent Velvet Revolution in April-May 2018 manifested that there is a strong consensus in the society towards democracy, human rights and rule of law. This landmark event in the modern history of Armenia also clearly demonstrated that we can take pride not only in our past, but also in our present, in building mature democratic institutions, free media, strong civil society, conducting free and fair elections, protecting human rights, empowering women and youth.

As a member of the UN since March 2, 1992 Armenia strongly believes in the value of multilateralism and the central role of the UN. Armenia is committed to promoting international security and cooperation, contributing to resolving global issues and working closely with all our partners in bilateral and multilateral platforms. We recognize the indispensable role of the UN in promoting the implementation of Agenda 2030 and the Sustainable Development Goals.

Armenia is a strong advocate of the prevention agenda. As a nation, which has witnessed the horrors of the genocide, Armenia bears special duty to promote prevention and punishment of the crime of genocide, including through remembrance and education.

I would also like to invite you to view the Armenian Rug Exhibition entitled “Armenian Treasures - Antiques in the Making” on display in the Curved Wall are provided by the Megerian Rugs and Megerian Carpet.
Traditional Armenian dances will be performed by the young artists of Shushi Dance Ensemble, and we will also listen to music by Armenian composers throughout the evening.
Thank you.