Statement by H.E. Mher Margaryan, Ambassador, Permanent Representative of the Republic of Armenia, at the UNGA 74 Third Committee, Agenda item: 26 – Advancement of Women 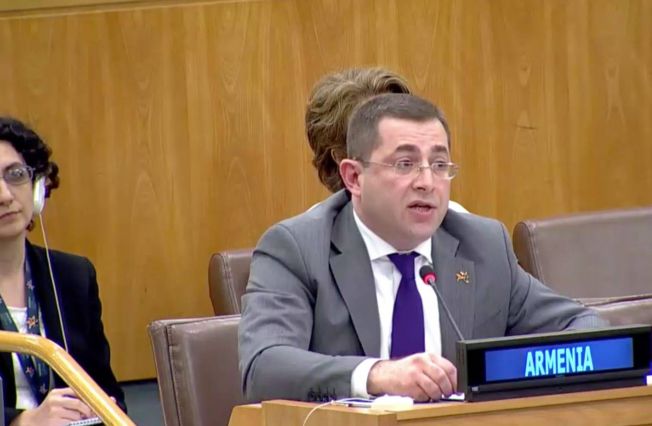 At the outset let me extend my congratulations to you on your election and wish you and the bureau all success in guiding the work of the Third Committee.

Empowerment of women and ensuring gender equality is a fundamental pre-requisite for tackling the world’s global challenges from peace and security to sustainable development and climate change.

The landmark anniversaries of key international documents in the sphere of empowerment of women, promotion and protection of their rights, such as the the 40th anniversary of the Convention on the Elimination of All Forms of Discrimination against Women, the upcoming 25th anniversary of the Beijing Declaration and Platform for Action and the 20th anniversary of UN Security Council Resolution 1325 on Women, Peace and Security, create an important momentum for further advancing the goal of promoting equality and inclusion of women and girls and upholding their rights.

We strongly hope, that these anniversaries will provide an impetus for accelerated realization of the SDG5 on achieving gender equality and empowering all women and girls across the entire 2030 Agenda.

The Government of Armenia advocates for women’s enhanced meaningful participation in public affairs and political life. Women and youth were the primary drivers of fundamental changes in Armenia in April-May last year. As Prime Minister Pashinyan has stated: “The Women have played an instrumental and decisive role in the Velvet Revolution”.

Today women constitute 25 percent of the National Assembly of Armenia. By 2021 the quota for women’s representation in elective bodies should be increased to 30%.

This September Armenia adopted the Strategy and Action Plan for Gender policy for 2019-23, which prioritizes improvement of national mechanisms for advancement of women, prevention and eradication of gender discrimination, expansion of economic opportunities for women with concrete set of measures and timelines for the implementation.

As a candidate country for the Human Rights Council for the term of 2020-2022, Armenia has pledged to enhance and strengthen the mechanisms and partnerships aiming at the political, social and economic empowerment of women, with a particular aim of promoting the participation of women and girls in community building and decision making processes and in taking on leadership roles across the society.

We strongly believe that women have an important role in prevention of conflicts, confidence building and reconciliation efforts.

The National Action Plan for the Implementation of the UNSCR1325, adopted by the Government in February 2019 prioritizes gender mainstreaming in security sector, including peacekeeping and peace-building activities.

The involvement of women in peacekeeping missions is among the priorities of security sector reform in Armenia. We have already deployed women peacekeepers to the UN and UN mandated operations.

The Commission on the Status of Women plays a leading role as the principal policy-setting body of the UN for gender equality and empowerment of women. We look ahead to the review and appraisal of the implementation of the Beijing Declaration and Platform for Action in the course of the upcoming 64th Session of the Commission on the Status of Women. It is a great honour and immense responsibility for me, as the Permanent Representative of Armenia to chair the proceedings of the CSW next year and I look forward to facilitate open and frank dialogue on the achievements, lessons learnt and challenges remained in realization of gender equality and empowerment of all women and girls.