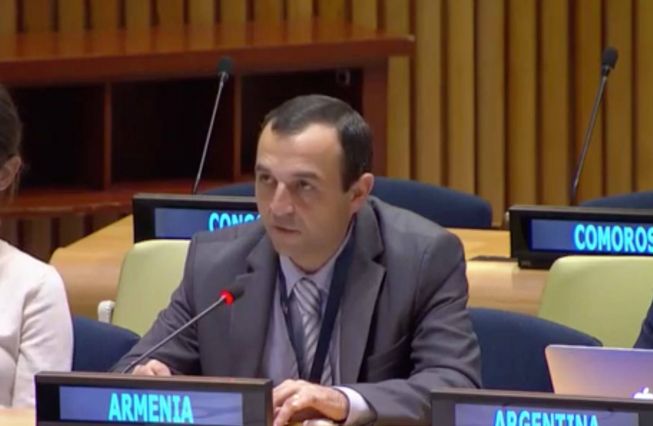 On behalf of the delegation of Armenia I would like to extend congratulations to you on your election and wish you and other members of the Bureau all success in your important work. You can count on full support of Armenia to this end.

Terrorism continues to pose serious threat to international peace and security. Horrendous terrorist acts have been perpetrated in many parts of the world throughout 2018, claiming many lives and proving that no country in the world is immune to terrorism. The international community should stand united and strengthen collective efforts to prevent and counter terrorism in all its manifestations in full compliance with international law, including International Human Rights Law and international humanitarian law.

Armenia continues to advocate enhanced international cooperation to fight terrorism. We are concerned by deliberate targeting of entire communities for the mere fact of belonging to a particular ethnic or religious community. The atrocities, perpetrated by ISIL (Da’esh), Al- Nusra Front, Al Qaeda and associated groups and entities are a point in case. The crimes against Yazidis, Christians and other ethnic and religious minorities and groups must not remain unaddressed. In this regard we welcome adoption of the UN Security Council Resolution 2490 on 20 September, 2019 as an important step to ensure continuity and consistency of the efforts of international community to hold accountable the ISIL (Da’esh) for the perpetration of acts that may amount to war crimes, crimes against humanity and genocide.

Armenia was among the first member states to resolutely condemn persecution of civilian population perpetrated by terrorist organizations. The brutal crimes against the Armenian population in the Syrian cities of Kessab and Deir-ez-Zor, the deliberate destruction of cultural and religious monuments committed by ISIL and Al-Nusra have demonstrated that terrorism is, essentially, a manifestation of fundamental denial of human rights.

The security challenges stemming from the return and relocation of foreign terrorist fighters become a pressing issue, as highlighted in the Ninth Report of the UN Security-General regarding the threat posed by ISIL (Da’esh) to international peace and security and the UN efforts to address it.

Return of FTFs and promotion of their terrorist narratives may have destabilizing effect, in particular in conflict situations. The violent ideology of terrorists finds a breeding ground in situations of state-led and state-sponsored radicalization of society, aiming at consolidation of power and identity building through scapegoating of certain ethnic and religious groups. Any attempts to justify inspirers or perpetrators of terrorism or violent extremism, as well as those inciting hate crime and violence, especially in conflict situations, should be decisively and unequivocally condemned, at all levels. Free media, civil society and religious communities are important partners in preventing extremism and radicalization through promoting dialogue, tolerance and respect for human rights.

Armenia is actively cooperating with its international and regional partners in implementation of the counter-terrorism conventions and their additional protocols, as well as the relevant resolutions adopted by the UN Security Council. We support the work of the United Nations Office of Counter-Terrorism and the Counter-Terrorism Committee Executive Directorate in strengthening counter terrorism coordination and coherence.

The last visit conducted by the Counter-Terrorism Committee Executive Directorate (CTED) to Armenia in July, 2018 highlighted our country’s progress in addressing terrorism-related challenges. Following the CTED recommendations, Armenia has launched the process of establishment of Advance Passenger Information System.
The regional and sub-regional organizations have a particularly important role to play in promoting and facilitating cooperation, including through sharing best practices and building stronger capacities to effectively address the threats of terrorism. We highly value the ongoing anti-terrorism cooperation in partnership with the Organization for Security and Cooperation in Europe, Commonwealth of Independent States, Colleactive Security Treaty Organization and other regional organizations.

In conclusion, we reiterate Armenia’s full commitment to contribute to the international efforts in countering terrorism in all its forms and dimensions.