Statement by H.E. Mr. Mher Margaryan, Permanent Representative of Armenia to the UN at the UNGA73 Third Committee/Agenda item: 74 – Promotion and protection of human rights 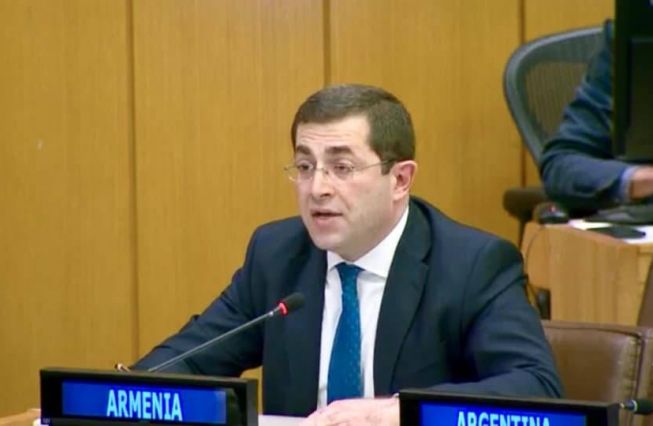 Let me first thank you for successfully guiding the deliberations of the Committee. I would also like to take this opportunity to thank the High Commissioner for Human Rights, Her Excellency Ms. Michelle Bachelet, as well as the distinguished rapporteurs for their reflections on human rights issues around the world.

The promotion and protection of human rights are indeed fundamental to addressing the many challenges, inequalities and grave realities in today’s world.

In April-May this year, the Republic of Armenia experienced major changes in its political system and daily life. Our new Government came to power following a non-violent, peaceful revolution led by the people. The revolution was a momentous time in the Armenian history during which the citizens of Armenia, with the youth and women at the forefront, fully exercised their fundamental freedoms of expression, belief, opinion, as well as their freedom of peaceful assembly. The revolution galvanized citizens to participate in civic life and has since given them a sense of confidence in meaningfully and democratically taking part in public affairs and political processes.

Currently Armenia is preparing for the parliamentary elections, which is another major step towards consolidation of genuine democratic transformation. Vibrant and outspoken civil society, together with crucial Human Rights institutions, such as the office of Ombudsman, will continue to provide strong public engagement and oversight.

Armenia is fully determined to embark on a new generation of reforms, which will result in enhanced political pluralism, equal opportunities and eradication of corruption. Since the very first days, the new Government has placed high priority on the fight against corruption, upholding the rule of law and the protection and promotion of human rights at the highest possible standards. We are confident that the political transformation brought about by the democratic developments in Armenia will continue to increase direct participatory democracy, civic engagement in various levels of government and the legislature. A number of executive and legislative reforms were initiated, such as reinforcing measures to promote women’s participation in decision-making positions and an increased representation in political parties.

Armenia has recently submitted the Third Periodic Report on the Implementation of the United Nations International Covenant on Civil and Political Rights , which highlights both the progress and the remaining challenges in the area.

An important functioning human rights implementation mechanism is the Human Rights Defender of Armenia, which serves as an independent national human rights protection institution, a national preventive mechanism, and a monitoring body for implementing the provisions of the UN Convention on the Rights of the Child. The Ombudsman complies with the requirements and standards of the National Ombudsman Institute and has an “A” status, indicating full compliance with the Paris Principles on protecting human rights.

Armenia is a strong proponent and advocate of the promotion of human rights internationally. Within the UN system we traditionally cosponsor and support the resolutions and initiatives that are called to address injustice and impunity, protect the most vulnerable and strengthen the international human rights law. Upon the initiative of Armenia, in September 2015, the UN General Assembly unanimously adopted a resolution proclaiming 9 December as an International Day of Commemoration and Dignity of the Victims of the Crime of Genocide and of the Prevention of this Crime. This landmark resolution followed up on resolution of the UN Human Rights Council initiated by Armenia.
This year marks the 70th anniversary of the Universal Declaration of Human Rights and of the Genocide Convention which is yet another milestone to reaffirm our collective determination towards protection and promotion of human rights and fight impunity for the crime of genocide, war crimes and crimes against humanity. We will be aiming at making best use of the platform of International Day of 9 December to raise the awareness of the goals of the Convention and support its universalization.

As a candidate for the Human Rights Council for the term 2020-2022, Armenia will continue to deliver on its commitment towards upholding the norms and principles of international human rights law through its implementation of executive and legislative reforms and national action plans, and will do its utmost to contribute to protection and promotion of human rights and fundamental freedoms worldwide.

Last week, Armenia hosted the Summit of the International Organization of La Francophonie, which gathered 84 member, observer and associate states in the capital of Armenia. The Yerevan Declaration on Living Together, adopted at the Summit, represents a collective pledge for the shared values of solidarity and cooperation, in embracing diversity as a source of peace, democracy and human rights.