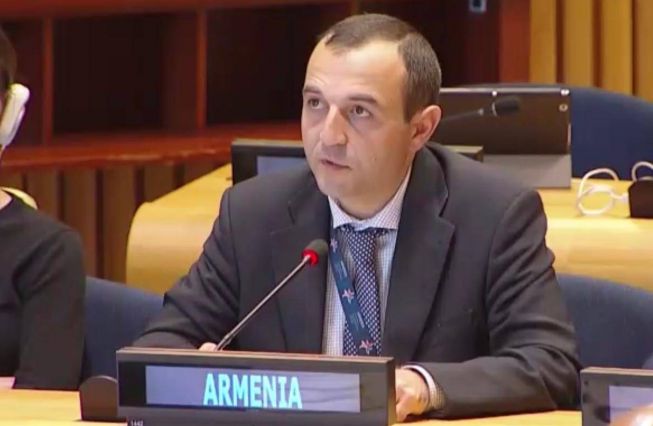 Armenia took note of the Report of the Special Committee on the Charter of the United Nations and on the Strengthening of the Role of the Organization A/74/33.

We are of the view that the Special Committee plays an important role in promoting the rule of law at the international level on the basis of the purposes and principles of the UN Charter.

We took note of the views and observations contained in the Report, relating to the topic of Peaceful Settlement of Disputes, mediation and existing practices in this regard. We would like to reiterate Armenia’s firm belief that each dispute or conflict is unique by its root causes, essence, mediation format and principles of resolution. We need to be cautious against attempts by some states to generalize conflicts under one roof or introduce artificial hierarchy of principles of international law, which are not conducive to achieving their fair and lasting settlement.

While recognizing the important role of mediation in preventing and resolving conflicts, Armenia would like to stress that engagement of mediators with all parties to a conflict is vital for advancing peace process. When it comes to initiatives of mainstreaming mediation, our point of reference in addressing such initiatives is the need to avoid duplication with the internationally mandated mediation formats. We should also bear in mind the need to refrain from creating incentives for mediation shopping.

Internationally mandated mediation formats within the framework of the regional organizations possess the necessary capacity and expertise in dealing with specific conflict situations. The effective utilisation of the capacity of regional agencies and arrangements in mediation, conflict prevention and pacific settlement of disputes is provided for in Article 33 and under Chapter 8 of the United Nations Charter.

We are of the view that the Special Committee should carefully examine the information provided by member-states before its reflection in the Report in order to avoid factual mistakes and distortion of the internationally accepted terminology. In this regard, Armenia would like to express its strong objection to the language, contained in the paragraph 59 of the Report, related to the Nagorno-Karabakh conflict. The reference to the title of the conflict concerned, as reflected in the Report, sharply deviates from the official terminology of the Organization for Security and Cooperation in Europe and its official documents. The distorted formulation of the conflict was included at the last minute by the suggestion of a single delegation, thus propagating one-sided narratives.

I request that this statement is duly reflected in the official records of this meeting.