Statement by H.E. Mher Margaryan, Ambassador, Permanent Representative of the Republic of Armenia, at the UNGA74 Third Committee, Agenda item: 70 – Promotion and protection of human rights 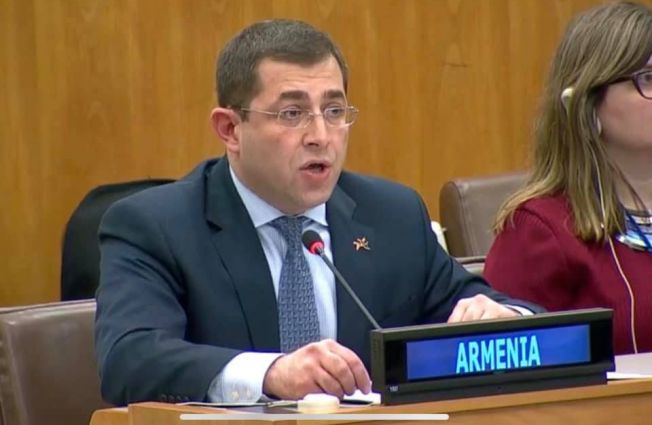 The promotion and protection of Human Rights are indispensable for building equal, prosperous, just and inclusive societies and promoting peace and security. By the virtue of treaties and human rights instruments, the international community has established fundamental standards and norms for upholding the human rights and delivering multilateral response to their violations.

The UN Charter based and Treaty bodies have special task and responsibilities in upholding the human rights globally. On October 17, Armenia was elected to the Human Rights Council for the term of 2020-2022 and I would like to take this opportunity to extend my sincere gratitude to all member-states for their invaluable support and confidence. Every vote cast for Armenia defined the immense responsibility of my country to re-double the efforts to work towards promotion of all human rights and fundamental freedoms worldwide and to lead by example. We are ready to engage positively with member states in addressing injustice, impunity and exclusion, protecting the most vulnerable and strengthening the international human rights law.

Since May 2018 Armenia has embarked on a new generation of reforms aimed at enhanced transparency and accountability, eradication of corruption, comprehensive reform of judiciary and human-centered inclusive models of development.

A vibrant civil society and an inclusive civic space are vital in safeguarding open, accountable environment where all voices are heard. It has been now a well-established norm for the non-governmental organizations, human rights defenders and advocacy groups in Armenia to consistently engage in consultations and dialogue with the authorities on human rights related reforms.

Currently, the Government, in close collaboration with civil society partners, is elaborating the new Strategy and Action Plan for the Protection of Human Rights for 2020-2023, which will further consolidate and mainstream the Government’s policies in the field and make them more efficient and measurable.

Armenia will continue to be a strong supporter of the mutually reinforcing agendas of the protection of human rights and the prevention of crimes against humanity and mass atrocities. We firmly believe that, collectively, more needs to be done to fight racism, xenophobia, hate crimes and gross violations of human rights, which so often represent the root causes of conflicts and crises. Protection of ethnic, religious and linguistic minorities and other vulnerable groups, including children, refugees and people with disabilities, are significant priorities for Armenia, both domestically and internationally.

We have consistently raised our voice against the immense sufferings, mass atrocities and genocide perpetrated against Christians, Yazidis and other ethnic and religious minorities in the Middle East, in particular Syria. The continuous violation of their human rights, crimes on ethnic and religious grounds and deteriorating humanitarian situation require stronger efforts of the international community to put an end to their suffering while identifying and holding accountable those responsible for gross violations of international humanitarian and International Human rights Law.

In our country, we have elaborated sound institutional and legal mechanisms to enhance participation of ethnic and religious minorities at the decision-making level and to enable the preservation of their language, traditions and religion to the full extent.

A few weeks ago, the world’s largest symbol of the Yazidi culture, the Temple of the Seven Angels, was opened in Armenia. Along with the most ancient Christian churches of the world and the Blue Mosque in the centre of Yerevan, the temple stands as another symbol of inclusion, preservation of heritage, religious and cultural diversity that our country has embraced.

Armenia will continue to exert resolute efforts in promoting international action against discrimination based on any grounds. We are committed to enhance and strengthen the mechanisms and partnerships aiming at the political, social and economic empowerment of women and young people, and promoting their stronger engagement across the society.

In my capacity as the Chair of the Commission on the Status of Women, I look forward to an active and constructive dialogue on the measures to accelerate the realization of gender equality and empowerment of all women and girls, as we approach the 25th anniversary of the Beijing Declaration and Platform for Action.

We are convinced that strong adherence to the values of democracy and human rights, equality and non-discrimination should guide our multilateral efforts for peace, security and development in line with the 2030 Agenda for Sustainable development.