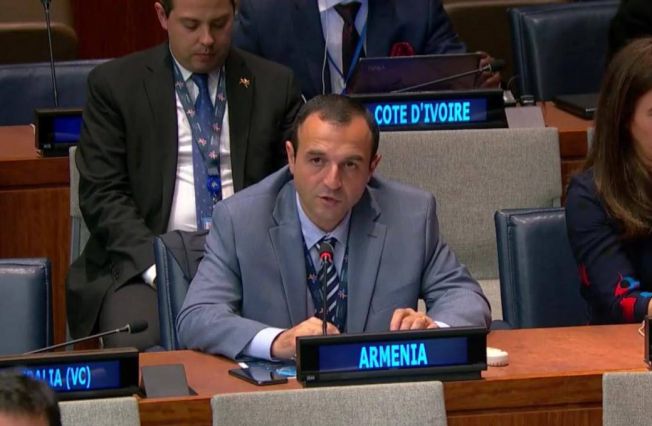 Armenia reiterates its strong support for confidence building measures at regional and sub-regional level, which can promote conducive environment for reducing tensions and resolution of political disputes and settlement of conflicts. All-weather implementation of legally binding obligations and commitments on conventional arms control and confidence and security building measures without political preconditions is an important cornerstone of such environment.

Armenia attaches particular importance to implementation of the OSCE Vienna Document of 2011 on Confidence and Security Building Measures, which is designed to promote solution of security issues through ensuring military transparency, predictability and accountability. It does not make any difference between peace, crisis or conflict situations”.

Unfortunately, the prevailing security situation in the region continues to be characterized by such challenges as uncontrolled military buildup, hostile rhetoric, threats of use of force, many-fold increase of military expenditures and open incompliance with the existing confidence and security building measures. Military posturing, such as holding of large-scale unnotified military exercises in border regions and lack of transparency and verification are a point to the case.

Major military activities, if conducted without prior notification, as required by the VD 2011, create an element of surprise, which under certain security environment can send a signal of readiness to use force. Therefore, they bear the potential of increasing tensions and leading to large scale hostilities. Such ill-practice seriously undermines trust, security and stability in the region.

Armenia fully supports activities of the conflict-related field mandates in the region, which are instrumental to promote confidence building measures, consolidate ceasefire regime, provide early warning signals and reduce tensions. Permanent presence of such field mandates in the conflict zones can promote restraint against military provocations and renewal of hostilities.

In conclusion, Madam. Chairman, I would like to reiterate that Armenia is fully committed to contributing to the work of the Committee with a view of advancing cooperation on advancing regional security and disarmament.