Statement by H.E. Mr. Mher Margaryan, Permanent Representative of Armenia, at the UN Security Council Open Debate on “Promoting the implementation of the Women, Peace and Security” 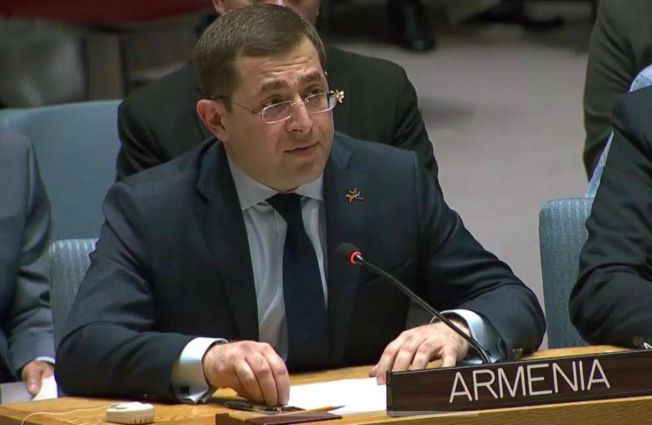 I would like to thank the Presidency of the Republic of South Africa for prioritizing the agenda on women, peace and security and welcome the adoption of the resolution earlier today, which Armenia co-sponsored. We also thank the Secretary General for presenting his report and commend his leadership in promoting gender-responsive policies and equal opportunities for women and girls across the United Nations system.

The upcoming 20th anniversary of UN Security Council Resolution 1325 is an important opportunity to strengthen the collective response and take resolute action to address all forms of violence against women and girls in conflicts and ensure full protection of their human rights in times of conflict and crises.

This landmark Resolution has created a comprehensive normative framework to scale up the efforts of international community in mainstreaming the role of women in prevention, post conflict reconstruction, rehabilitation and peace-building and addressing special protection needs of women and girls in conflict situations.

Armenia firmly believes that women have a key role to play in all conflict stages, particularly in confidence building, promoting peace and reconciliation. Inclusive engagement of all women affected by conflict in peace and security efforts is vital for promoting lasting and durable settlements and sustaining peace. We emphasize the need to protect the rights of women and girls residing in conflict areas, as the most affected population and advance their meaningful participation and representation in prevention and peacebuilding processes.

I would like to recall in this regard the “Women for Peace” campaign, initiated by the spouse of the Prime Minister of Armenia, which is an important example of an inclusive platform for women and mothers to raise their voice for peace, non-violence and reconciliation across dividing lines.

Armenia attaches great importance to advancing women, peace and security agenda in the framework of its national policies aimed at ensuring political and public participation of women, their empowerment and promotion of gender equality. In February this year the Government, in close cooperation with civil society and international partners adopted the National Action Plan on implementation of the UNSCR 1325 on Women, Peace and Security, thus consolidating national policies and strategies with the aim to make them more coherent and coordinated.

The National Action Plan focuses on prevention, protection, participation, relief and recovery with clear objectives, timelines and performance indicators. It identifies concrete set of measures to increase the engagement of women in the security sector, including in peacekeeping missions, promote political participation and economic empowerment of women in context of conflict prevention, resolution and peacebuilding. It puts particular emphasis on the protection of rights of vulnerable population groups, such as women residing in border communities and women affected by conflicts.

In light of the upcoming twenty-fifth anniversary of the adoption of the Beijing Declaration and Platform for Action and the five-year milestone towards achieving the Sustainable Development Goals next year is a critical milestone for scaling up the realization of gender equality and the empowerment of all women and girls.

The UN Commission on the Status of Women, as the main UN policy-making body in the field of empowerment of women is an important platform also for advancing the women, peace and security agenda. As the Permanent Representative of Armenia and the Chair of the 64th session of the CSW I look forward to contributing to gender-mainstreaming in the security sector governance and reform and substantial involvement of women in peacebuilding and peacekeeping activities.

In conclusion, I would like to reiterate Armenia’s firm commitment to further streamline empowerment of women in its reform agenda and ensure their inclusion and active participation in political and public life as important prerequisites for promoting peace and security.