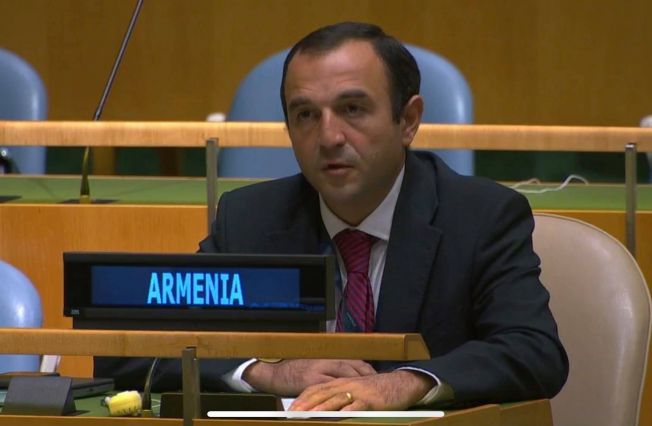 
Madam Chair,
I congratulate you and the members of the Bureau on assuming the leadership of the Third Committee and wish all success in stewardship of its activities in this landmark year for the United Nations.
Undoubtedly the deepening crisis caused by the COVID-19 pandemic and its severe impact across all spheres of our societies, including the enjoyment of human rights will shape the discussions of the committee this year. Most of us would agree that the global response to the crisis should be people-centered, inclusive, gender-responsive and human-rights based. Ensuring full protection of human rights for all should be at the centre of our response and recovery efforts.
The UN Secretary-General’s appeal for an immediate Global ceasefire plays a key role in ensuring protection and fundamental human rights for the most vulnerable, including women, children, persons with disabilities, people affected by conflicts, in line with the pledge of leaving no one behind. Armenia reiterates its principled position that human rights are universal and interdependent and everyone is entitled to all the rights and freedoms regardless the international status of the country in which these people live, as defined in the Universal Declaration of Human Rights. Politicizing of human rights and denial of human rights for people residing in conflict areas is unacceptable.
As I am speaking here, the right to life, right to development and other fundamental rights of the people of Nagorno-Karabakh are under threat due to the ongoing aggression by Azerbaijan. The pre-planned large-scale military aggression unleashed by the authoritarian regime of Azerbaijan with full backing of Turkey pursues clear genocidal intent. The Azerbaijani armed forces have targeted the capital city Stepanakert, other cities and settlements both in the territory of Artsakh and Armenia. Indiscriminate and intentional strikes on civilians and civilian infrastructure, schools and hospitals, have led to killing of 21 people, including women and children and dozens of wounded.
Having imposed total information blockade on its own society and Internet lockdown, Azerbaijan is deliberately targeting journalists in the conflict zone in an attempt to prevent flow of objective information and documenting the war crimes conducted by its armed forces. We condemn attacks on journalists and media workers, in violation of relevant UN GA resolutions on safety of journalists. The aggressor country and its supporters should be held accountable for gross violation of international human rights law. Impunity should not go unpunished.
It is already recognized by the international community that mercenaries and foreign terrorist fighters have been transferred from the territories of Syria presently under occupation of Turkey to use them in hostilities against Artsakh. We deplore in strongest terms this irresponsible policy by Turkey to export violence and instability to neighboring regions, use the terrorist organizations to commit atrocity crimes against the Armenian people of Nagorno-Karabakh and impede their right to self-determination.
The military aggression by Azerbaijan against the people of Artsakh is the culmination of decades-long state policy of intolerance, hatred and Armenophobia promoted and nurtured in the Azerbaijani society. Glorification of perpetrators of hate crimes against Armenians, systemic use of hate speech by political leaders, educational institutions and media have been documented by international organizations, including the European Commission against Racism and Intolerance of the Council of Europe and Advisory Committee of the Framework Convention for the Protection of National Minorities. Failing to build representative and accountable democratic institutions, to uphold human rights and ensure rule of law, the ruling autocratic regime in Azerbaijan derives its legitimacy by portraying Armenians as a “useful enemy” to justify the dire human rights situation in the country, oppression of opposition, free media and independent civil society.
Madam Chair,
Unlike Azerbaijan, the people of Artsakh have long embarked on democratic state building with fair, inclusive and just society, based on the respect for human rights and dignity. The free, fair and competitive nationwide elections held in NK in March this year, in line with the international standards have been case in point.
The people of Nagorno-Karabakh are fully entitled to their inalienable human rights, including the right to self-determination.
Madam Chair,
We look forward to an active and constructive dialogue within the Committee to further build up on our collective commitments in regard to upholding and promoting universal and indivisible human rights and fundamental freedoms for all, countering discrimination, hate speech and xenophobia and ensuring gender equality and empowerment of women.
Thank you.
կիսվել:
ՀՀ ԱԳՆ
պաշտոնական կայք
Երկքաղաքացիություն
Էլեկտրոնային վիզա
Արտոնագրի ձևեր