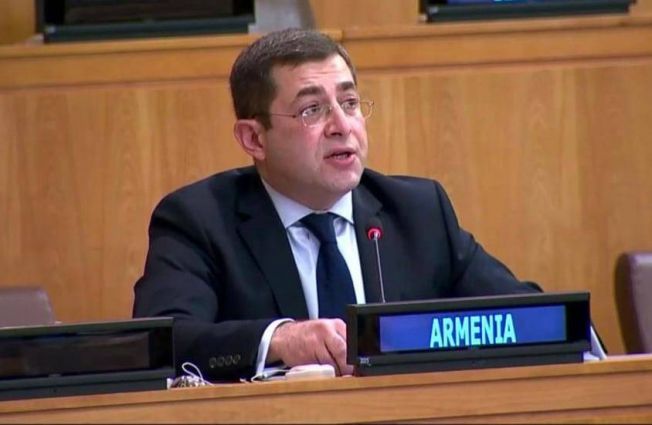 
We thank the Secretary-General for the Report on strengthening and coordinating United Nations rule of law activities and for the sustained focus on the protection of justice, inclusive and accountable institutions and human rights, especially, in times of crisis. Armenia reaffirms the imperative of upholding rule of law at the national and international levels and thrives to constantly improve its regulatory framework to this end.
As demonstrated in this year’s report, the Government of Armenia continues working closely with the United Nations towards the promotion of effective and inclusive justice institutions and human rights.
In doing so, we have been implementing a new generation of reforms aimed at enhanced transparency and accountability, comprehensive reform of judiciary and people-centered, human-rights based inclusive models of development.
As part of the ongoing reform of the judiciary, Armenia has been working on the progressive improvement of its legislation in a large number of areas. We have a proven track record of effective international cooperation on justice sector reform, including within the regional frameworks of the Council of Europe and its Commission for Democracy through Law, which, along with the vibrant civil society and an inclusive civic space, have been instrumental for our ongoing reform efforts.
Armenia welcomes this year’s sub-topic on fight against corruption. Our country is a party to all relevant international instruments and mechanisms for fighting corruption and is committed to efforts towards building enhanced anti-corruption frameworks, including relevant prevention mechanisms and integrity systems. The establishment of the Corruption Prevention Commission has been an important step towards improving governance, transparency and accountability in Armenia.
Mr. Chairman,
Corruption and lack of integrity bring about erosion of social and institutional trust leading to various forms of instabilities. In the absence of access to justice and respect for human rights, exacerbated by situations of crisis, such as the coronavirus pandemic, massive and systemic corruption may well lead to most dangerous developments, including conflict and violence. The situation in our region is one such example.
Having failed to build just, peaceful and inclusive society, the leadership of Azerbaijan, for decades, has been instrumentalizing the Nagorn-Karabakh conflict to cling on to power and silence dissent.
In light of the sharp contrast with Armenia’s recent progress on human rights, democracy and rule of law, the dictatorial regime of Azerbaijan - a country, where, for many years, elections have been marred by fraud and violence - has opted to start a massive military aggression in the middle of pandemic, aimed to divert attention from its dishonourable corrupt practices and internal insecurities. The appalling human rights and corruption record of Azerbaijan needs no introduction.
It would be sufficient to recall the scandalous multi-billion dollar money-laundering scheme, named "Azerbaijani Laundromat"* exposed three years ago by the Organized Crime and Reporting Project as part of the Global Anti-Corruption Consortium in partnership with Transparency International.
It has been almost four weeks now that the armed forces of Azerbaijan with the military support of Turkey and involvement of mercenaries and terrorist fighters have been conducting large scale hostilities in the region, amidst the outbreak of the COVID-19 pandemic and in total disrespect of the Secretary-General’s call for a global ceasefire.
The Azeri -Turkish joint aggression is accompanied with gravest violations of the international humanitarian law, including indiscriminate attacks against civilians, destruction of cultural and religious buildings, shelling of schools, kindergartens, hospitals. Attacks on journalists, use of mercenaries, mutilations, public executions, inhuman treatment towards prisoners of war, use of banned cluster munitions, breach of the ceasefire arrangements and despicable indecencies amounting to war crimes have been documented and presented to International community.
All the available evidence clearly indicates that the Azerbaijani attacks are nothing less than an attempt to resolve conflict by force and conduct ethnic cleansing. This is unacceptable and should no longer be tolerated nor condoned. The time has come to resolutely denounce force, coercion and terrorism as methods of conflict resolution and name the aggressor and their enabler and to make them adhere to the basic norms of humanity and to the Rule of law at national and International levels.
Thank you.
* -  https://www.occrp.org/en/azerbaijanilaundromat/
կիսվել:
ՀՀ ԱԳՆ
պաշտոնական կայք
Երկքաղաքացիություն
Էլեկտրոնային վիզա
Արտոնագրի ձևեր