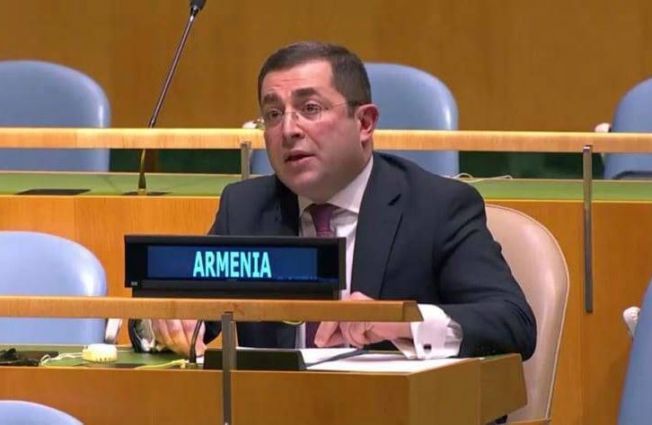 
Mr. President,
The COVID-19 pandemic and the associated challenges have been disruptive in many ways, leaving most profound impacts on human societies all over the world. As the world seeks to readjust to the new global context, relying on the usual tools to merely embrace “the new normal” is not enough. The COVID19 pandemic and the human sufferings it has engendered stand before us as a collective test of unprecedented magnitude and scope, a test which requires urgent response that would go beyond talks and protocol meetings and focus on meaningful action and tangible outcome. Unfortunately, this special session does little in this regard.
From the very outset of the process of initiating a special session, Armenia has been questioning the added value and integrity of the proposed initiative against its declared objectives. Remarkably, the statement made on December 3rd by the President of Azerbaijan, who also happens to be the chair of the NAM, has exposed the true motivation of one country that chose to instrumentalize the pandemic and the humanitarian challenges around it to create platform for promoting its dictatorial leader and incite anti-Armenian hatred. I am hopeful that those who had doubts about the objectives of Azerbaijan took very careful note of their national statement.
Indeed, there can be nothing humanitarian about the intentions of a country, which launched a large-scale war in Nagorno-Karabakh in the middle of pandemic, with the direct and open military support of their enabler country and foreign terrorist fighters and mercenaries from the Middle East. There is nothing humanitarian about targeting essential infrastructures with the purpose of killing innocent people, causing a humanitarian crisis and making life in Nagorno-Karabakh impossible.
The premeditated large-scale war unleashed by Azerbaijan, in flagrant violation of the trilateral ceasefire agreements of 1994 and 1995, has been the biggest military escalation in times of pandemic.
The Statement of 9 November on the ceasefire and termination of hostilities in the area of Nagorno-Karabakh conflict and the deployment of the peacekeeping forces of the Russian Federation was instrumental for establishing durable ceasefire. The Government of Armenia highly appreciates the decisive actions by the Russian Federation and remains committed to the comprehensive, lasting and sustainable resolution of the Nagorno-Karabakh conflict in the framework of the OSCE Minsk Group Co-Chairmanship, the internationally mandated mechanism to deal with the settlement of the conflict.
Regrettably, Azerbaijan and Turkey have chosen to demonstrate every intention to prioritize instigation and further aggression over peace and recovery. The show that was staged in Baku on 10 December under the name of "victory parade” featured brazen territorial claims by the president of Azerbaijan, who referred to the areas of the Republic of Armenia, including the capital of Armenia as “Azerbaijani territories.”
Of particular audacity and cynicism were the misplaced, inappropriate references to the Great Victory over Nazism in 1945. Such profane and criminal parallels are deliberate, intentional insult to the memory of those who fought in the battlefields for the victory of humanity 75 years ago.
The statement of the President of Turkey, the co-host of the so-called “parade” featured open threats and glorification of the perpetrators of the Armenian Genocide by, clearly demonstrating a genocidal intent.
Mr. President,
The level of cynicism and hypocrisy present in the statements and actions of Azerbaijan is an open reflection of the dysfunctionalities that persist in the world today. A world, in which Azerbaijan proposes a humanitarian initiative while unleashing a deadly war against its neighbor. A world, in which Turkey floods the region with thousands of foreign terrorist fighters and mercenaries from the Middle East to assist Azerbaijan commit numerous war crimes, atrocities and other gross violations of international human rights law and humanitarian law, causing loss of lives, destruction of religious and cultural heritage, mass displacement and a large-scale humanitarian crisis created in the middle of a global pandemic. A world, in which the masterminds and the perpetrators of such crimes think it is possible to whitewash history, barbarity and violence with multilateral smokescreen and with no checks and balances, nor accountability in place.
Such dysfunctionalities are incompatible with the core values, ideals and principles of the United Nations and must be seen as a source of threat to everything the civilized humanity stands for.
In this year of global turbulence, major grievances and calamities, the international community has a moral duty to reflect, with the sense of urgency and seriousness of the purpose, on such persistent dysfunctionalities and to lay the groundwork for meaningful response.
Thank you.
կիսվել:
ՀՀ ԱԳՆ
պաշտոնական կայք
Երկքաղաքացիություն
Էլեկտրոնային վիզա
Արտոնագրի ձևեր