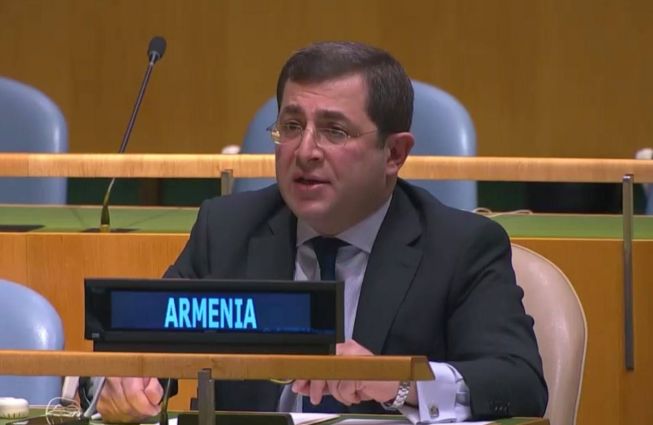 Mr. President,
We thank the Secretary-General for presenting the Report on the Work of the Organization in 2020 and outlining the current priorities. Indeed, the past year has been the most challenging period for the United Nations and the world since the end of the Second World War, as the COVID-19 pandemic evolved from a global health crisis into a global calamity, claiming millions of lives, shaking the very foundation of our societies, increasing structural inequalities and disproportionately affecting vulnerable populations in situations of conflict and humanitarian emergency.
On the long and winding road to recovery, a genuine commitment of all member states to effective and responsible multilateralism remains a key precondition for building back better.
Having embarked on the Decade of Action for the SDGs, we must consolidate all efforts to make sure that the 2030 Agenda for sustainable development remains an overarching framework in achieving a better future that leaves no one behind. In the spirit of this collective pledge, equitable access to all essential health technologies and products to combat the virus will be a critical global priority. No one, including people residing in conflict areas, should be denied or be limited in access to remedies to mitigate the impact of the pandemic. The outbreak of the COVID-19 has been detrimental to the international efforts for peace, development and human rights, exacerbating divisions, tensions, conflicts and other vulnerabilities.
Armenia was among the first member states extending its full and unequivocal support for the Secretary-General’s appeal for an immediate Global ceasefire in all corners of the world launched at the outbreak of the pandemic. Yet, despite the calls for international solidarity and appeals to observe a global ceasefire, the past year has seen an unprecedented level of violence, war and human suffering. Our region is one such example, where senseless, brutal violence and destruction disrupted the decades-long efforts for peace, development and human security, as the pandemic and the associated challenges continued to ravage the world.
The pre-planned aggression against the people of Nagorno-Karabakh/Artsakh in the midst of a global healthcare crisis took a heavy tall on the civilian population, leading to loss of life, numerous violations of international human rights law and humanitarian law, destruction and desecration of religious and cultural heritage, mass displacement, humanitarian crisis and an influx of Foreign terrorist fighters and mercenaries to the conflict zone specifically recruited and transferred from the Middle East. We appreciate the strong support voiced by the UN Secretary-General throughout the period of the hostilities for immediate cessation of fighting and urgent resumption of dialogue under the auspices of the OSCE Minsk Group Co-Chairs.
Mr. President,
The global challenges caused by the pandemic are a test to multilateralism. Amidst the growth of authoritarian tendencies, hate speech, weaponization of the pandemic to unleash wars, oppress the dissenting voices and violate human rights, the United Nations should serve as the guardian and the custodian of the international law, the purposes and principles of the UN Charter and values of humanity. The ability of the Organization to prevent and respond to these challenges is crucial for its credibility in ensuring that the pledge to leave no one behind goes beyond a mere declaration.
While we have welcomed the readiness of the United Nations to respond to the humanitarian needs in all areas affected by the conflict and the Secretary-General’s call on all relevant actors to cooperate fully with the United Nations entities to ensure their unfettered access, the UN system must not become hostage of manipulations and the narratives of authoritarian regimes.
In pursuing the reform of the UN system, we encourage the Secretary-General and the Secretariat to look into the persistent gaps to eliminate the opportunities for manipulations by strengthening the independent capacities of relevant agencies and departments, particularly when it comes to accurate reporting and delivering urgent humanitarian action. Attempts to instrumentalize the programmatic cooperation with the United Nations to promote one-sided, discriminatory narratives and justify identity-based violence must be effectively identified, addressed and eradicated, at all levels.
Armenia remains committed to continue pursuing its ambitious reform agenda in cooperation with the United Nations and other international partners to build back and recover better by investing into strong and accountable democratic institutions, promoting human rights and gender equality, combating corruption and strengthening the rule of law.
We reiterate our support to the Secretary-General’s efforts in strengthening the Organization and its resilience in the face of the emerging global challenges in order to help fulfill the aspirations for a better future for all.
Thank you.
կիսվել:
ՀՀ ԱԳՆ
պաշտոնական կայք
Երկքաղաքացիություն
Էլեկտրոնային վիզա
Արտոնագրի ձևեր